Srdja Trifkovic and the Right. 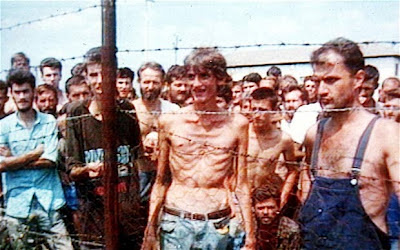 For his actions and his writings, Vulliamy was named “Foreign Correspondent of the Year” in 1992 – an accolade he fully deserved. But that was two decades ago. After the end of the Bosnian war he moved to America, where he reported on such things as the drugs war along the Mexican border, and the aftermath of 9/11. One might imagine that, with so many new crises to think about, he would have “moved on” (as the cant phrase has it). But however far he has moved, Bosnia has stayed with him, for two reasons – one good, and one bad.

The bad reason is the campaign of denial about the camps which still rumbles on to this day. A article called “The Picture that Fooled the World”, published by LM Magazine (“LM” was short for “Living Marxism”), accused the journalists of deliberate deception. One of the news organisations involved, ITN, sued for libel and won. Yet the lies put about by atrocity deniers – for example, that Mr Alic, the xylophone-ribbed man, was a TB sufferer who looked like that normally – still circulate on the internet, and Vulliamy is obliged to set the record straight again and again

Srdja Trifkovic gets a fair amount of time in the Conserve-o-sphere and has many supporters amongst people whom are otherwise quite clear thinking individuals. I suppose he gets the traction that he does because he is a good writer with monarchical tendencies and a strong anti-Islamist. I think therefore his writing resonates with the sympathies of many conservative and they tend to think of him as "one of us."

His bio, which can be found here at Wiki makes for interesting reading. He was a cheerleader for the Serbian Republic in Bosnia and their two founding fathers Radovan Karadzic and Ratko Mladic. Two very, very nasty men. My beef with Trifkovic is not because he is pro-Serbian. As a conservative, I expect a man to love his country; my beef with him is the ideology he supports is evil, and his love of Serbia is of the same type as Hitler's love of Germany; to the exclusion of everyone else.

All the troubles in the last Century of that region ultimately hinge around issues of support or rebellion against the ideal of Greater Serbia. In fact, WW1, which was probably the most calamitous event in terms of the destruction of traditionalism in Europe, was started by an assassination which was meant to further this aim.  So much for shitty little backwater provinces not being important.

Now, as a Christian Conservative, the only conservatism that I'm interested in is the conservatism that supports God's law. Trifkovic's conservatism is not of this kind, so he kind of rubs me the wrong way. He is quite good on condemning the crimes perpetrated by others onto the Serbs but basically turns a blind eye when team Serbia is pursuing the dream. The issue then becomes more "complex".  To Trifkovic, Srebrencia (7000 Muslim men and boys executed by Mladic) is a political event blown way out of proportion. Never mind the video.

Srebrenica was the final straw which snapped the world passivity to Greater Serbian aggression. As the Serbs were surrounding Muslims in other pockets, domestic pressure, especially in the U.S., led to NATO airstrikes against Serbia to stop further repeat massacres. To Trifkovic, it was a naked expression of  U.S. imperialism.

Unlike in the 30's and 40's where there we no television crews to report on events. The day to day coverage of the war in Yugoslavia left Serbia with a tarnished reputation. A reputation which finally began to turn the corner with one pivotal event;

Muslims which were only of trivial concern to the U.S. suddenly became the number one enemy and the apologists for greater Serbia were able to seize on this change in sentiment with gusto to rehabilitate it. Just like the Nazi's who claimed that their war against Russia was a war against Bolshevism instead of a pursuit of Lebensraum, the Serbs recast their territorial expansion as a war against Islam. Suddenly they're the West's friends. This is why Trifkovic, in my opinion, is beating the Muslim menace drum. He's not concerned about Europe as much as he is concerned about rehabilitating Serbia.  We're all on the same side now.

Trifkovic, from what I see, also uses several other journalistic devices to further his aims.

Firstly, with regard to the war in Yugoslavia he claims that the Serbs were unfair victims of public opprobrium during the war since all parties committed morally repugnant acts. And like all great lies there is an element of truth in them; yes all sides did commit atrocities. But anyone who looked at the facts squarely saw that the vast majority of the crimes were committed by the Serbs.  The Allies bombed Dresden, but only a moral idiot could equate the occasional sin of the Allies with the systematic evil of the Nazi's.

Secondly, he argues that the break up of Yugoslavia was not the Serb's fault since they did not want succession. Once again mixing a lie with a bit of truth. Neither did the Croats or the Slovenes want full independence initially, but the Serbian nationalism reasserted itself with the fall of Communism, and being the privileged parties in the former Yugoslavia they were quite keen to keep their exploitative positions. Britain too, did not want America to gain independence. The Americans were obviously bastards for wanting to leave such a "happy family".

Finally, in issues of moral clarity against his cause he needlessly introduces complexity into the issue whilst in issues favouring his, the moral clarity is obvious. So with regard to issues like Srebrenica, a few Muslim men who clearly committed atrocities are roundly and explicitly denounced, whilst Serbian crimes are obfuscated away.

Trifkovic's problem is his moral relativism, which is at the heart of the Western disease. His inability to clearly distinguish between right and wrong (especially with regard to matters Serbian) stains his conservative credentials.The conservative patriot will damn his own "in-house" murderers as harshly as those of others. When he starts excusing his then I damn his moral relativism, in him, and in any Croat\Greek\German\Englishman who thinks the same. He carry's within hm the Western Disease, the inability to see the difference between right and wrong. The fact that he speaks sensibly on some things is more a co-incidence between Western Conservatism, with its emphasis on the truth,  and Serbian monarchic nationalism with its primary good being Serbia. The real test of his conservative credentials is where he stands when the two differ. He has failed the test.

He wins the Walter Duranty award.