Roissy was in fine form the other day with his take-down of the pyjamaboy and the associated left mindset. However, one bit of his piece disturbed me, and that was comment he quoted from Randal Parker's blog. "If we had real democracy":


The elite support democracy but democracy of the sort the Western industrialized nations have in which all but the most trivial decision-making processes have been removed from elected representatives and placed in the hands of unelected judges, bureaucrats, and trial attorneys.

Populism is in complete opposition to this type of democracy. If the people could vote directly on each individual issue, they’d support all these things: an end to almost all immigration, legal and illegal, and sending back people in the country illegally. Strong defense, but non-interventionist foreign policy. Strong tariffs on just about everything to put American workers back to work. Tough crime laws and severe prisons. Death penalties after one month. Gun ownership, but with licensing. Removal of vagrants from the streets. Forcing the mentally ill into institutions. Equitarianism not egalitarianism. Forced government jobs for everyone who can’t find one in the public sector. An end to affirmative action. You get the idea, they are on the opposite side of the elites on all issues.

By and large, the elections in Western Countries are free and fair. Political and policy change is only an election away. If people were seriously pissed off about current policy they would look for alternatives. They don't. Third party politicians and their parties rarely make any headway. Every cycle of the electoral process offers a chance for change, and yet with every cycle the incumbents remain the same.

Conservative pundits, despairing of the slouch to the left,  proclaim that the public are being "tricked" and that if only the public could be better informed then people will see the errors of their ways. Bit like arguing that the way to lose weight is by more information about diet. Despite the plethora of diet books, magazine articles and internet sites, how exactly has that notion worked out?

The current political landscape is the way it is because voters have voted for it. Yeah; sure, the voters may complain about illeagal migrants but they sure as hell love the government largesse. And when it comes to a tradeoff between national good and personal interest it always ends up being a tradgedy of the commons.

Here in Australia, the electoral cycle would swing between the economic incompetence (usually through largesse) of the Left, followed by the unpopular but necessary austerity legislation of the Right. The "system" was balanced. However, the net result of several cycles of this political pattern has resulted in the Left being percieved as the "caring" party whilst the Right is seen as heartless amongst the mind of the local mass-man.  Astute Conservative politicians here have recognised that there is little to be gained by being fiscally responsible, especially when the electoral margins are tight, as it will ensure electoral wipeout and have also begun with the social security largesse.  The system is now in a positive feedback loop.

The reason why there is always some second rate tool heading a Western Government is because a good man is unelectable. Any good politician, genuinely concerned for the interest of his nation, given the current state of the West, would have to implement anti-populist policies and would thus be thrown out in the next electoral cycle. In trying to convince the people with rational arguments for his policies, he would pass the microsecond attention span of Joe Sixpack, and besides, X factor and American Idol are on. He's also boring. Not like the football.

Thought experiment. In imagining who pyjamaboy would vote for, is not Obama the perfect fit? Could you see him voting for Reagan or Eisenhower?


The larger the mob, the harder the test. In small areas, before small electorates, a first-rate man occasionally fights his way through, carrying even the mob with him by force of his personality. But when the field is nationwide, and the fight must be waged chiefly at second and third hand, and the force of personality cannot so readily make itself felt, then all the odds are on the man who is, intrinsically, the most devious and mediocre — the man who can most easily adeptly disperse the notion that his mind is a virtual vacuum.

The Presidency tends, year by year, to go to such men. As democracy is perfected, the office represents, more and more closely, the inner soul of the people. We move toward a lofty ideal. On some great and glorious day the plain folks of the land will reach their heart's desire at last, and the White House will be adorned by a downright moron.

And for the poor bastards who bled for democracy in Iraq and Afghanistan--I weep for thee. Here is the wiki article on Support for Gay Marriage in the U.S.

That even 50% of American would support a notion,that as little as 20 years ago was though of as ridiculous,  would confirm Menken's notion that American is nation of morons and repudiates Randal Parker's commentator. Amongst my friends here in Australia, I can't believe the amount of positive talk I'm hearing from people who only years ago thought such a notion insane.

The fact is that popular opinion on the subject has swung because the Left has, through a carefully thought out psyche ops, program "convinced" the "rational" voter. The convincing has involved nothing more that simplistic, childish pseudo-philosophical arguments, careful media presentation and soppy sentimentality. It was an appeal to the emotions and not the brain. Classic Advertising 101.  The fact that the public have fallen for them is not proof of Left trickery but public stupidity. Con men are most successful with morons. That's not to say that the Left are "conspiring to trick the public"---they believe their own bullshit, it's just that their smart enough to realise that when it comes to convincing the "common man" they've got to aim for heart, which is easy, since he hasn't much of a head.

In a democratic society, the foundation material of the body politic is an idiot.

It's high time Conservative, especially Christian commentators, re-evaluate their approval of non-qualified democracy. Remember how Christ was put to death. 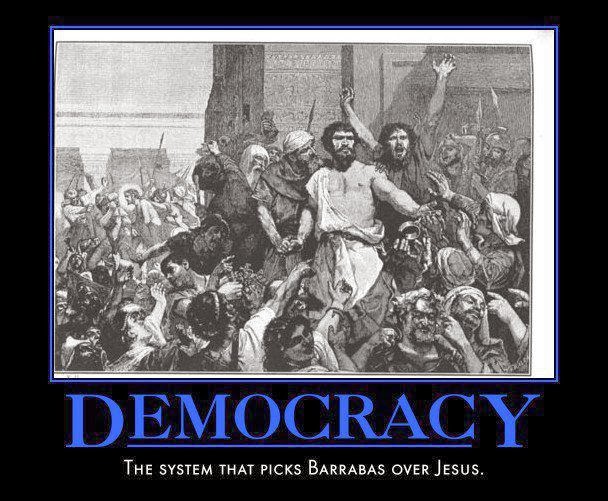 That's right, by democratic vote.
Posted by The Social Pathologist at 10:08 pm 8 comments: