As mentioned previously, a man who has the ability to stimulate a woman's alpha receptor will elicit both attraction a positive sexual response. The fact that such a man will frequently have a wide variety of suitors from a population of women with wildly disparate upbringings and social environments would seem to suggest that there is a common genetically predetermined neurobiological pathway for this phenomena. A woman's response to alpha behaviour, just like a woman's maternal response to the presence of little babies, is hard wired.

Also as mentioned previously, is the fact that social and rational factors also play an important role in mate selection. The Gamma male literally ticks all the boxes, being both socially, rationally and primitively agreeable to the woman.. An example of such a man would be a good looking and successful executive of a non-profit NGO. Here the cognitive state resembles this illustration. 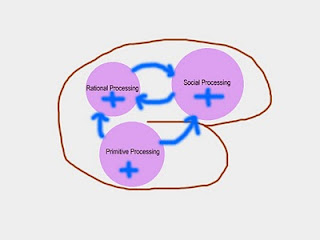 In this situation, no stress is generated as all the cognitive processes are operating in unison re-enforcing each other. A woman cannot hope for better relational state than this as this is optimal state. Unfortunately in the real world, a woman's mate options are in many ways as limited as a man's: Optimal men are scarce.

As mentioned previously, alpha receptor activation is necessary for sexual attraction and many men who possess the ability to do so are flawed in other ways. Indeed the the typical cognitive pattern of the alpha male is as follows. 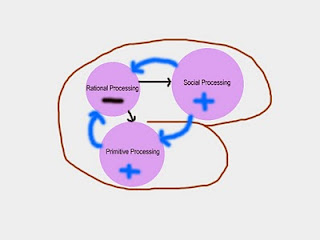 What's happening here is that whilst primitive and social processing are providing strong feelings of approval, rational processing is detecting serious flaws in the prospective mate and sending inhibitory signals to the other cognitive functions: Stress ensures potentially corrupting the mating process.

In the presence of primitive attraction( hard wired) and rational repulsion(soft wired) a woman will not mate with the male. On the other hand, in the present of strong attraction and rational repulsion, primitive processing will influence rational processing in such a way as bias the rational processing as to rationalise away objections to the mating process. The more sexually attracted she is to her otherwise unsuitable partner the more likely she is to engage in this form or rationalisation. 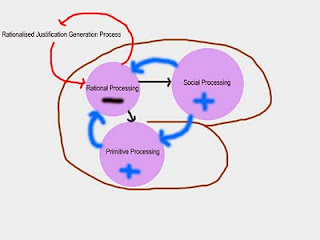 The aim of the mind is to recreate the state as exemplified in the Gamma Male illustration.

In low investment choices, i.e one night stands and short term flings, this cognitive inhibition may be of minimal importance as the woman can rationalise away the inhibition by recognising the relationship as strictly short term and of minimal importance. In longer relationships of potentially higher investment value, a woman will engage in all sorts of self-justification and illusory ideation in order to justify the relationship.

This last one is particularly jarring and perplexing, especially to the laying in the wings beta male, who idolises and worships the affected woman(and who provides the shoulder for her to cry on) but who chafes at his spurned affections. The spurned beta wonders, Why does she reject me and stick with him especially when he treats her so badly? The reality is that she wants to stay with him for his alpha qualities and is trying to find an excuse to do so. It needs to be noted that the woman is not "lying" when she is doing this, rather their is a "hard wired" cognitive bias towards rationalising away the stress present in the relationship.

This last justification is particularly powerful deceiving rationalisation to outside observers as well; eliciting both sympathy towards the woman and paradoxically socially justifying her relationship with the man who obviously inappropriate. "She has low self esteem, don't be too hard on her" . The whole "I don't deserve anything better" rationalisation provides a powerful motive not to leave the relationship whilst at the same time gaining social sympathy as an "abused victim". It surprising how many women discover the self-esteem and leave the relationship when a greater alpha suitor presents himself.

Note, the same process can occur when there is low sexual attraction but high social justification for the relationship. When the social justification ceases, the woman "suddenly" finds out that she is "living a lie" and initiates divorce proceedings. The genetic meta imperative of the female mind is to eventually align thought with emotional state.
Posted by The Social Pathologist at 10:09 pm 7 comments: