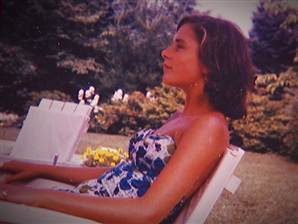 Whilst many people who read Mimi Alfrod's book will be interested in her liaisons with JFK, I must admit that it's this  aspect of the book that hold the least interest for me.  The fact that JFK had numerous affairs really doesn't interest me that much. I can separate the politician from the man. Lincoln, on being told that Grant was drunkard, disregard the information on the grounds that he needed a fighting general and not a moral but militarily impotent one. No, what interests me about her book is the insights she gives with regard to alpha behaviour and the psychology of love and infidelity.

Minim Alford led a double life.  She was part time college student, part time presidential mistress and was, like JFK, able to compartmentalise her life.  Long after she had started her affair with the President, she met a young man, Tony Fahnestock who eventually became her boyfriend. He had known her for barely eight months before proposing to her, so besotted was he. He came from the same social circles that she did and and both families seemed to be happy with the match. In her autobiography,  she states that she was "in love" with him. But it was a peculiar type of love, since whilst engaged she continued to have sex with JFK.  It is also true that the situation did seem to trouble her conscience, and she claims that she was hoping to end the relationship with the President. Still, two months before her marriage she was still sleeping with him.


As winter melted into spring, I began seeing Tony practically every other weekend, either at Williams or at Wheaton. We didn't have an intimate relationship at this point. He never pressed me for sex.

While his gentlemanly behavior was quite attractive, this situation did pose a bit of a conundrum for me. I was physically attracted to Tony and I had learned the pleasures of sexual intimacy from President Kennedy. This created a yearning in me for something more than necking in dorms and cars.  But pushing for sex with Tony would have raised questions; girls like me didn't do it back then. I might have to explain why it wasn't my first time, and that wasn't a conversation I wanted to have.

When I wasn't spending weekends with Tony, I was spending them with the President. Tony wasn't curious-or suspicious-about my other life in Washington. Why would he be? When we had started dating, I had already spent a full summer at the White House--and I had warned him that I continued to be needed at the press office even while I was at college. He not only accepted the lie, he was impressed by it.

The man was doomed. Reading between the lines in her autobiography, Tony Fahnestock seems to have been a regular  preppy gentleman of the times. He honestly loved and trusted her completely, and behaved towards her in the chivalric way of the West,  so besotted was he by her. When Fahnestock proposed to her, it was with a custom made ring, made up of sapphires  and diamonds from his grandfathers cuff links and stick pin.  A ring chosen from family heirlooms is act of profound significance. It all the more emphasis the contrast between the purity of his love for her with the terrible situation he was unknowingly in.

In her book, she gives a rather remarkable passage as to her psychology of infidelity;


And yet, being with the President and having his undivided attention was like taking this incredibly potent self-esteem drug. And that's a hard habit to kick. Despite the humiliations and uncertainty, I remained enthralled charisma and glamour of traveling with his entourage. My college life of dorm rooms, cafeteria dining, fraternity parties,  homework and moviegoing paled by comparison with Air Force One, Caribbean resorts, the Secret Service, and limousines.

Whilst Tony loved her, she was lounging poolside with the President. Also interesting was her psychology for accepting Fahnestock's marriage proposal;


There are many reasons why people say yes to a marriage proposal. Love ought to be the first reason, and mine was. But so is the need for security and certainty. I had just turned twenty that May and felt, as young people do, that I was dealing with so many unknowns. Where would I be working after the summer? How would this end with the President? Where would I live after Marnie and Wendy went back to college? When would I ever find a catch like Tony again?
In marrying Tony I was opting for security.

There was a lot of blatant self interest in her decision, and I got the impression that she loved him as a parasite loves a host; for what it can provide. People think love is a feeling, it is not. What love is, is a delight in the good of another.  The "love" she felt was probably an infatuation, a hedonic experience  and not a love that obligates itself toward the good of another. True love, wishes the good to the beloved, what she wanted was the best of both worlds for herself. Her primary consideration was her own well being.  Had she loved Tony for Tony's sake she wouldn't have been sleeping with President. She liked Tony, she liked the Presidential mistress role and she was optimising things for herself.
Kennedy was using her, she was using Fahnestock and Fahnestock was the patsy.

When Kennedy found out that she was engaged he acted as if it did not matter (Students of game will recognise this as alpha behaviour). Indeed, three months before their marriage, after another rendezvous in New York,  Kennedy's response was:


He took me in his arms for a long embrace and said, "I wish you were coming with me to Texas." And then he added,
"I'll call you when I get back."
I was overcome with a sudden sadness. "Remember Mr President, I'm getting married," I said.
"I know that," he said, and shrugged, " But I'll call you anyway."

Such is the way of amoral alpha. Kennedy did give her some wedding gifts. He paid for an expensive dress, which he wanted to see on her first (Ed: and presumably had sex with her after the modelling. I imagine Tony would have appreciated that as well.), two gold and diamond dress pins, and a signed photo of himself (Skittles man).

Alford found out about the assassination whilst on a weekend away with Fahnstock. Initially she was able to maintain her composure, but later in the evening, when the two of them where alone and watching television, she saw the President's coffin being lowered from Air Force one in the company of an close aid of the dead president, an aid whom she knew well. Suddenly she began sobbing violently. Fahnestock was perplexed by her response;

"What's happening to you?" he said.
"There's something I have to tell you."
"What?"
"The President........"
"What?" He interrupted.
"It's more than you think......"
"What?"
"I'm not as innocent as you think"
"What?"
"There's a reason why I quit school"
"What?"
"You have to let me finish please."
I stopped crying and tried to gather my thoughts.
"I was closer to him......"
"What are you telling me-that you slept with President Kennedy?"
I don't know how he made the leap from my distress to my infidelity but I nodded yes, relieved that I didn't have to say the words out loud.
Then Tony's tone shifted into a harsh interrogation.
"Since when?" he asked.
"Last year."
"Even after you met me?"
I nodded.
"Even after we were engaged?"
I nodded again.
"How many time?"
"I don't know. A lot."

Then there was silence.

Oswald's bullet had tore a hole into Fahnestock's heart.

(Passages quoted from the book have been done so on the "fair use" provisions of copyright)
Posted by The Social Pathologist at 12:19 am 6 comments: