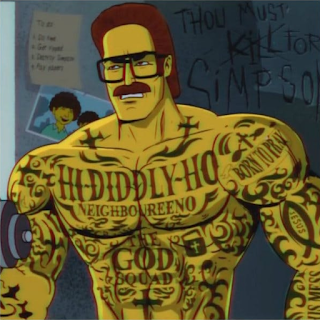 The Body was no longer what it was when Plato and Porphyry and the old mystics had left it for dead. It had hung upon a gibbet. It had risen from a tomb. It was no longer possible for the soul to despise the senses, which had been the organs of something that was more than man. Plato might despise the flesh; but God had not despised it. 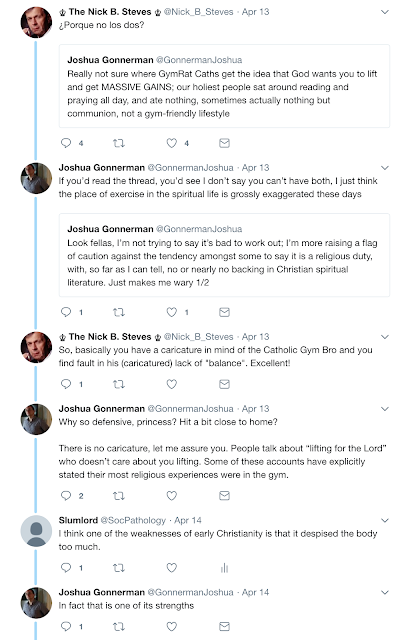 Now, I've got to admit that excesses of any kind are a sign of mental imbalance but the overall tone of that comment, and later ones, suggested that author was disparaging the idea of a "muscular Christianity".  Now the point of this post is not to rag on the author of those comments but to point towards what I think is a persistent tendency in Christian thought and one that has caused a lot of untold harm especially with regard to the Christian understanding of man.

Machialvelli, when it came to institutions, was fond of making a distinction between the "formal" and the "real".  The formal being that which was publicly expressed and the real was what actually happened.  Now Christian, especially Catholic theology, tends to be a formal acknowledgement of the goodness of the created world but in practice there tends to be strong suspicion of it.  The Christian "tradition" itself, tends to have a strong Platonic bent to it, emphasising a the flesh/spirit duality, with this duality having an implicit hierarchical aspect to it: the spirit being "higher" than the flesh.  Giving weight to this view are certain oft quoted texts in the Bible. So when JG states that a disparaging of the body is one of its strengths he is certainly justified by "tradition" for his view.

Certainly the Bible cautions about following the ways of the flesh, but I really can't find an endorsement of neglecting it entirely or pretending that it doesn't matter. Much like the rider of horse, the role of the spirit is to guide the flesh and not let the horse lead the way. Platonism certainly doesn't dispute this, however the way it approaches the subject it's as if the well being of the horse doesn't matter at all. In fact, especially among the religious ascetics, there seems to be a certain notion that treating the horse badly or neglecting is a virtue. Chesterton recognised this as well;


This Platonic influence could be seen particularly in the fact that "the earlier school of Augustine and even of Anselm had [treated] the soul as the only necessary treasure, wrapped for a time in a negligible napkin." Chesterton even detects in the Greek theological tradition "a sort of dried-up Platonism" that translated into "the last indeed noble abstractions," but too far removed from the concrete world, the consequence being that the Logos of the Byzantine Greeks "was the Word, but not the Word made Flesh." As a result, "the earlier Christian ages had been excessively anti-corporeal and too near the danger line of Manichaean mysticism."


The truth is that the historical Catholic Church began by being Platonist; by being rather too Platonist. Platonism was in that golden Greek air that was breathed by the first great Greek theologians. The Christian Fathers were much more like the Neo-Platonists than were the scholars of the Renaissance; who were only Neo-Neo-Platonists. For Chrysostom or Basil it was as ordinary and normal to think in terms of the Logos, or the Wisdom which is the aim of philosophers, as it is to any men of any religion today to talk about social problems or progress or the economic crisis throughout the world. St. Augustine followed a natural mental evolution when he was a Platonist before he was a Manichean, and a Manichean before he was a Christian. And it was exactly in that last association that the first faint hint, of the danger of being too Platonist, may be seen.

This Platonic tradition had caused serious problems in the Church that there was a serious danger of incursion of Islamic philosphy into Christiandom (I don't want to go into to this now for the sake of brevity). Theologically, the real blow to this NeoPlatonistic view of the person was dealt by the work of St Thomas Aquinas who was able to reconcile Aritistolean hylomorphism with Christianity. i.e  the Man was both spirit and flesh. Again, quoting Chesterton,


In a word, St. Thomas was making Christendom more Christian in making it more Aristotelian. This is not a paradox but a plain truism, which can only be missed by those who may know what is meant by an Aristotelian, but have simply forgotten what is meant by a Christian. As compared with a Jew, a Moslem, a Buddhist, a Deist, or most obvious alternatives, a Christian means a man who believes that deity or sanctity has attached to matter or entered the world of the senses.

I really want to emphasise this point, Christianity emphasises that sanctity and matter are conjoined.  The view espoused by JB is explicitly rejected by Aquinas. This is why actions of the flesh impact upon the spirit, it's because you dealing with one thing possessing two different qualities rather than two separate discrete things. What we do with our bodies affects our souls. Matter has some dignity.

Now while Christianity, Catholicism in particular, may affirm the teaching of St Thomas, the manichean Neoplatonist tendency is still strong in the Church. Historically, the Church has been quietly supportive of mortification of the flesh in the pursuit of sanctity but has remained rather silent or very hostile on the subject of the perfection of the flesh in pursuit of sanctity. Fasting for Jesus is good but doing reps for Jesus is suspect. But why is fatness less an evil than fornication? Why is the prudent pursuit of physical perfection a morally suspect thing?

Even in the understanding of evil, the tradition of the Church still operates on Neoplatonist lines. The sin of gluttony is "abstracted" into the broader sin of excessive sensuality. Maybe I've not read a lot but I've never seen gluttony pointed out as an offence against the body, a mutilating sin. For a Neoplatonist it doesn't matter since the body is not important. And that's the problem with Neoplatonism it neglects realities for theories. The idea is more important than the substance.

And yet the logical consequence of a Thomistic theology is that prudent perfection of the body should be spiritually beneficial.  If the object of Caritas is to perfect the form of the thing considered then its operation on the flesh is to perfect it. Now, for the spergs out there, I'm not advocating bodily perfection at the expense of the all the other facets of life a man must attend to, rather there needs to be a prudent balance, with the recognition that the neglect of the body is a sin. Doing a few reps for Jesus is a corrective.
Posted by The Social Pathologist at 12:30 am 9 comments: