Srdja and His Friends: A Love Story. 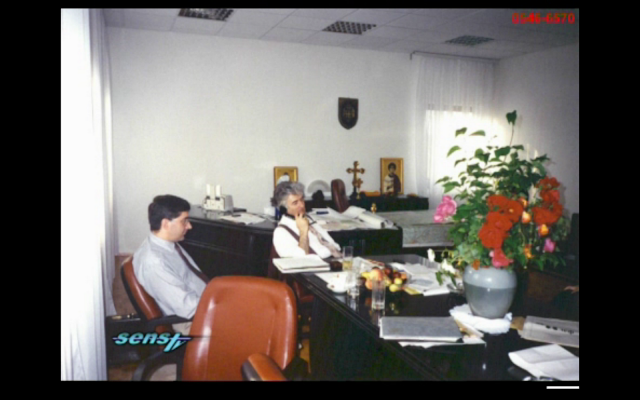 Whilst all sides committed atrocities during the Yugoslavian wars, the party who committed the overwhelming majority of them where the Serbian Nationalists. Currently, there is an effort by Serb Nationalists to rehabilitate their image through research foundations which are really propaganda fronts such as The Lord Byron Foundation(p26082) (Note, there is no obvious Serbian link mentioned). Their aim seems to be threefold. Firstly, to generate a sense of moral equivalence between the warring parties, thereby diminishing their blame. Secondly, they push strong anti-Catholic stance is meant to unite them with the more extreme Protestants.  Thirdly, their re-framing of the Greater Serbia project as some sort of anti-jihad is meant to garner sympathy with the current anti-Islamic sentiments in the West and the pro-Israel lobby. Their aim is to obscure, lie and re-write history, and thereby garner support for their cause.

Srdja Trifkovic is one of their foremost "intellectuals". His rantings would not bother me so much if he weren't so prominently featured in some of the mainstream U.S. conservative journals. He therefore has gets quite a large right wing audience, which is interesting because the views he has are most strongly supported by people such as Noam Chomsky and John Pilger.

Srdja's Bio (with over 600 revisions) can be found here.  From Srdja's writings it would appear that he is a Serbian Royalist with extreme sympathy to the Serbian Chetnik cause. The Chetniks, you see, are the Serbian version of the Croatian Ustashe(with whom they collaborated), and who wish to see an ethnically pure greater Serbia.  Most of them are monarchists and absolutely hate the Serbian socialists. So when Mr Trifkovic states that he hated Mr Milosevic he was being quite truthful. The only thing that simpleminded Western audience didn't recognise is that he hated Mr Milosevic because he wasn't nationalist enough.

At the outbreak of the Yugoslav wars, and bored with his duties working for the Serbian King in-exile,  he wanted  to get in on "the action" and volunteered to associate pro bono for Radovan Karadizic(page 25211), who is currently on trial for war crimes in the former Yugoslavia. In  Mr Karadzic he found a leader of kindred spirit for whom he wanted to work for out of ideological love. Srdja's job was to act as the official/unofficial spokesman of the Bosnian Serbs leadership. At times he could be seen on the telly "analysing" and at other times "speaking on behalf" of the leadership. His loose relationship with them giving both parties an avenue of plausible deniability when things got "sticky".

But all good things come to an end and when his "unofficial/official professional associate" Radovan went into hiding he decided to take up a job with the next Bosnian Serb president Biljana Plavsic, becoming her adviser.


Yes, I was Plavsic's consultant during her brief presidency (1998), when she was persona gratissima in Washington, where I accompanied her during her visit in May of that year. She was certainly not a "member of the Milosevic regime" -- quite the contrary, she was his determined foe, which made it possible for me to help her, and made her attractive in the eyes of the U.S. Administration.[ed]

This little gem was described by the Ultra Nationalist Vojslav Seselj as an "extremist"!


She held very extremist positions during the war, insufferably extremist, even for me, and they bothered even me as a declared Serb nationalist. She brought Arkan and his Serb Volunteer Guard to Bijeljina, and she continued to visit him after their activities in Bijeljina and the surrounding area [...] Radovan Karadzic [...] believed her to be more extreme than himself in every way. He thought that the Western protagonists who tried eliminate him at any cost would have an even greater problem with her [...]

Unfortunately for Srdja, he had to give up his day job, as by pure bad luck, she too, was indicted for crimes against humanity. During her trial she confessed to her criminality. The judges looked upon her confession with sympathy and reduced her sentence. In jail, she gave an exclusive interview to a Swedish magazine where she both denounced her former friend Karadzic and announced that she lied about her contrition to secure a shorter sentence. Class act.

While not associating with people who happen to end up at the Hague, he likes to defend those about to go there.  Srdja, the fair jurist that he is, insists that we must assume Ratko Mladic innocent till proven guilty, never mind the fact that for years his smiling beaming face could be seen on television casting a watchful and benevolent eye over Sarajevo. As for Srebrenica,  Srdja's explanation is that most of the Muslim males died in battle--quite a lot with their hands tied behind their backs. It's all anti-Serbian prejudice you know. Using Srdja's type of logic, you see, Hitler never the chance to have a fair trial and therefore should be presumed innocent until proven guilty.

Now, Mr Trifkovic's revisionist Serbian Nationalism is standard fare to anyone with any knowledge of the former Yugoslavia and of the propaganda war waged by the former participants.  What gets me is how Mr Trifkovic gets to get so much "airtime" on the conservative forums whilst being so closely associated with people who present the antithesis of Conservative thought. Even if you were to assume that all sides in that conflict were equally morally guilty (which they weren't), who in their right mind would want any of them commenting in an organ of mainstream conservative opinion without  checking up on their past? If they have checked up on his past and are OK about it, then Mainstream Conservatism has serious, serious philosophical issues.

Western Conservatism rests on the Christian tradition which in turn implies certain philosophical positions, the primary being a commitment and obligation to the objective truth.  Our whole argument with the Left is that they lie and explain away facts which are inconvenient. Any person, who claims any pretension to intellectual conservatism is judged by their commitment to this ideal of being a standard bearer of the truth. Now it's quite legitimate to dispute facts with other evidence, but it's another to deny or selectively interpret them to confirm a pre-existing bias. It's by this latter criteria that Srdja fails this test by the most cursory on-line examination.

As mentioned before, Srdja's prejudices don't really concern me as much as the American Right's "embracemnt" of him. This nonchalance with regard to Srdja's past and economy with the facts shows just how shallow the depth is of American Conservatism. I want to be quite clear about this. It's not him being pro-Serb that is the issue, it's his placing his love of Serbia over the love of the truth that is the issue, and its an issue which American Conservatives seem quite at ease over, and it is this which bothers me.

Islamic radicalism and its threats are the current cause celebre in American conservatism and it appears to me that mainstream American Conservatism seems to be more concerned with gaining the support of allies, who conform with the preconceived conceptions of the issues concerned, rather than trying to understand the matter, which is a precondition to any possible resolution. In many ways it resembles the thinking of the Left, in that as long as you're with the program we really don't care about the facts. Srdja is an ally because he is anti-Islam, never mind the fact that the policy Srdja's friends pursued generated the very radicalism that is now a threat.

As not so long ago as the early 80's, the Islamic fundamentalists were being supplied and armed by the Americans in their fight against the USSR. They were seen as heros by conservatives. I suppose it occurred to no one at the time to ask whether arming people with a professed life view that was inimically hostile to the West was a wise long term policy.

It would appear to me, that truth is less of an issue to mainstream American Conservatism than is partisan politics. It's being on the right side, rather than being right, is what matters.

The problem with that is that that is profoundly unconservative.

(Some more pictures of Srdja and his mates can be found here(The pictures are shown at 10:50). Unfortunately, there are no English subtitles. The picture shown above is a screen capture.)
Posted by The Social Pathologist at 11:26 am 9 comments: