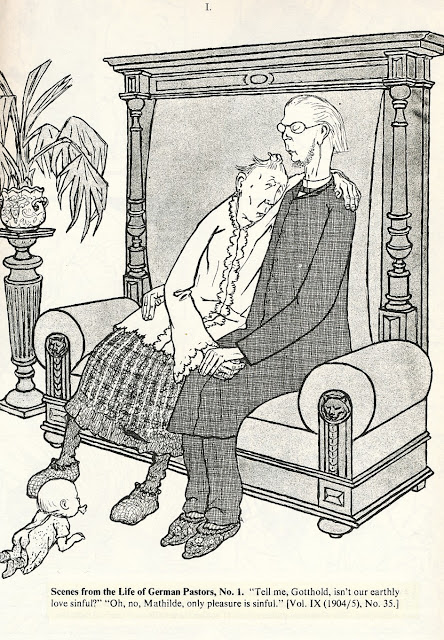 There are some people who state that the exterior, sex, or physique of another person is indifferent to them, that they care only for the communion of mind with mind; but these people need not detain us. There are some statements that no one ever thinks of believing, however often they are made.

Recently, I was commenting at a conservative religious site(I'm not linking to it) about the subject of Game. The host of the site was critical of Game, considering it to be anti-Christian at heart. Like most conservatives, the host could find nothing good about it, confusing the hedonist imperatives of some of its proponents with the actual teachings of Game.

I've often felt that one of the reasons why churchy types find game objectionable is because of its emphasis on getting a woman sexually aroused; and many churchy types point to this aspect of game when they criticise it. On the other hand, women who respond to game are frequently viewed negatively, as if there was something wrong with them. Even amongst a fair portion of the manosphere there is a lot of criticism of women who find players attractive.

I've been mulling over this point for a while, as I've often felt that there was something wrong with this line of reasoning.  The more I think about it, the more I'm convinced that the problem is not with the women but with their critics. The problem, I think, is in our cultural conception of romantic love.

There has always been an ascetic element in Western Culture which has viewed the pleasures of the flesh as morally suspect. Now, it's my belief that Christian culture has been hijacked by these ascetic types, and whilst Christianity has admittedly always warred against the flesh,  the puritan aspect of  it has seen this war as a war of extermination instead of subjugation. Subjugation at least recognises the validity of flesh's existence whilst keeping it under control, extermination denies the flesh's right to exist. And it appears that this puritan element of Christianity has had the upper hand in shaping our understanding of human sexuality and love.

Romantic love, as idealised, was always above the waist. Somehow, it was always a tender and romantic thing. Fluids, smells and noises were never mentioned; and the idea of a man and woman, shagging each other senseless, doesn't quite fit the fit the picture of romantic love. Indeed, one of the things about much romantic love is that it lacks a "physicality",  instead, being something that exists on another plane.

This romantic view of love, was also contingent upon their being a romantic lover; a lover who was courteous, considerate, gentle and kind. And it was this  romantic masculine ideal that became progressively entrenched in Western Culture, particularly amongst the middle class males. The resultant product was a consciously desexulised man, whom whilst "nice" to his wife, did nothing actively to satisfy her carnal nature.

Just as hunger predisposes the existence of bread, so do our carnal desire predispose the existence of a worthy lover. If we assume that average woman is in possession of a least some form of carnal appetite, then this implies that there is a man out there that can satisfy it. The problem is that the good man--at least defined by the puritans-- could not satisfy it, since he had been taught that the flesh was base and love is on a "higher plane",. The only man who could satisfy this carnal nature was the bad man: Puritan romanticism was the midwife of the "bad boy".

Now, women get a lot of heat in the manosphere for wanting to satisfy their carnal desires by sleeping with bad boys, in other words, the man-o-sphere is criticising women for doing what comes to them naturally. (See note below) However if we think about what is considered the ideal woman; the mother, the madonna and the whore, we find that there is a whorish dimension to the ideal woman's personality. What the manosphere is effectively doing is criticising women for being sexual.  It's  puritanism in another form.

What I'm not advocating here is sexual abandon, rather, rather a acknowledgement of the legitimacy of female carnality within the context of Christian marriage. A lusty but faithful wife is a good wife, not abnormal or impure in some way. If we recognise the legitimacy of this female carnality it becomes incumbent upon husbands to cater to it. Not in a sense of being a slave to a woman's desires, desires that are natural, rather recoginising that they are legitimate needs. Needs, that if not catered to,  will give an opportunity for someone else to do so. The usual Christian response to sexual frustration is re-emphasise the importance of the vow and pay lip service to the frustration, what we never hear is the Christian emphasise the legitimacy of the husband or wife's sexuality. Sexuality here does not imply the simple mechanical action of sex, rather the whole gamut of features which stimulate the partner's desire. When's the last time you've ever heard a minister/priest/religious figure criticise a woman for letting herself go or the husband for being a wuss? The whole ascetic conception of romantic love is that it will conquer all, and that sexuality is not that important.

But as long as Christians keep peddling this "asexual romantic" version  of marital love, they are undermining the foundations of that institution.  Firstly, by ignoring carnal legitimacy, they are promoting an institution that pseudo-legitimises sexual frustration. This does not mean that every Christian marriage is sexually frustrated, rather,  if sexual frustration occurs in marriage it is not viewed as big deal and effectively ignored. The good Christian puts up with it and his faith is constantly tested, the bad Christian seeks satisfaction outside the marriage or deligitimises the institution or the culture that put him in that predicament. Strengthening christian marriage will come about only when there is a recognition of the legitimacy of its carnal component, not in the context of making babies, but as appetites in themselves which seek satisfaction. Wives injure their husbands and their marriages when they ignore this dimension and husbands injure their marriages when they fail to satisfy their wives' carnal natures. The current bad boy fetish is because the "good guys" are  hyposexual.

Viewed in this light, a beta male, is simply hyposexual male from a woman's point of view. And this raises the second problem with the "romantic" view of love; it's an attack on concept of gender identity.  Now, if our sexuality is part of our identity, then masculinity must be defined, at least partially, by what women find attractive. That which sexually arouses the woman is masculine, and that which sexually arouses the man, is feminine. Our gender identity is the complement of our opposite's sexual appetite. Traditional "hyposexual" romantic love is an attack on our gender identity since it legitimises a lover which ignores our sexual needs: Being manly doesn't matter, only being nice and kind and loving, any asexualised man will do.

The solution to this problem is to reassert the carnal nature of male-female love and legitimise it. Romance is important, but so are our fleshy needs. Romantic love needs to be alpha'ed  up.

(For those Aspergy types. A woman who has taken a vow of marriage subordinates her desires to the marriage, hence if she breaks her vows for whatever reason she is the guilty party. But the degree of her culpability is contingent upon the actions of her partner. A partner who has been objectively neglectful of his marriage, in whatever sphere, bears some of the blame as well. Wussy and nice men aren't completely innocent. A man has to have a pair.)

Hayley, over at Hayley's Halo seems to be thinking along parallel lines:

Also, I think the other, not-really-acknowledged part of it is that for all the admonishments for young, Christian women to look forward to the day God brings them to the special man God has picked out Just For Them, a lot of young, Christian women just don’t possess the suite of wifely skills that would increase their marital prospects.  Sure, there are hyper-organized young women whose idea of heaven is The Container Store, but there are just as many, if not more, slobby girls out there whose rooms look like hurricanes blew through them.  A lot of girls don’t know the basics of cooking.  A lot of girls don’t clean…much.  They don’t iron, they don’t decorate, they don’t know how to look for bargains or budget, they don’t know how to dress themselves with both dignity and style.  Some of these skills come with time and experience, but a lot of girls can only offer their youth and their love for Jesus.  That’s just not enough when it comes to marriage, but so much churchly advice does these girls wrong by teaching them that Mr. Right will be identifiable by his love for her good heart alone and that he will arrive in God’s Perfect Timing.  So just keep on being frumpy and praying, because God can see your beautiful heart even if those sin-blinded men out there
who are probably addicted to porn and as a result can’t see your true beauty
can’t.  Is this really the best way to offer hope to unmarried women? [Or men, Ed.]

Posted by The Social Pathologist at 11:41 am 18 comments: