The other day I was perusing the internet and ran across a post at Hooking Up Smart called, The Essential Truth of Female Promiscuity. In the post Susan Walsh quotes a study linking promiscuity with marital instability. The article she links to is actually another article quoting the study in question. After a bit of hunting around I was able to locate the actual study. The study itself called, The Harmful Effects of Early Sexual Activity and Multiple Sexual Partners Among Women by R Rector et al, 2003, and it's a real eye opener. I'm surprised more mention of it has not been made amongst the right/conserve-o-sphere. The study is based on a survey of 10,000 women done in 1995 by the Center for Diseases Control.

Men have generally viewed female promiscuity in a negative light. Admittedly whilst some men don't care, the majority view a woman's promiscuity negatively in proportion to her partner count. It's fascinating if one "Googles" the subject, just how many men--both Conservative and Liberal--can't "get over " a woman's partner count. Liberal men indoctrinated in "Girrl power" seem to be perplexed as to why these negative emotions are aroused in them despite their own beliefs.

The Evo-bio crowd will probably argue that the aversion has been developed by evolution as a mechanism to avoid cuckoldry, unfaithfulness etc. I've always had the intuition that promiscuity seemed to injure "Love" in some way, furthermore the type of men a woman slept with revealed in many ways the type of woman she is. The woman who chose patently bad suitors was a woman lacking in good judgment and refinement; the essential qualities of femininity. Lacking femininity, a woman is a turn-off.

Slut, of course, is the term applied to a promiscuous women and debates rage as to what number of partners earns the title. I think this is the wrong way of looking at the problem. The real danger of a promiscuous woman is that she will be unfaithful, so the definition should be really centered around that concept. i.e How many sexual partners does a woman need to have before she becomes high risk marriage material? The study quoted above asked the question. 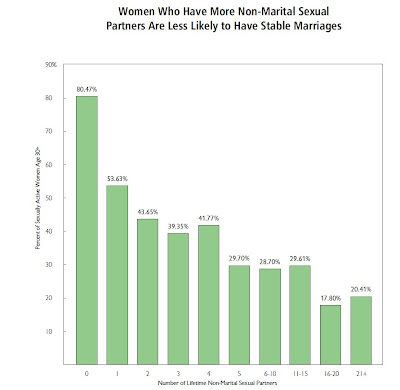 Now, Stable Marriage was defined as being currently married for greater than 5 years. It's a pretty non-demanding definition of stable. Now I thought that I was quite a cynical and judgmental bastard but I never expected these figures.

The virgin bride has an 80+ percent chance of having a stable marriage. Once a woman has had more than one non-marital sexual partner the probability of her having a stable marriage drops to 54%, that's almost a 50-50 chance of divorce. The statistical threshold is crossed--in other words, your betting on failure--once a woman has had two non-marital partners. Given that the aim of the game is to avoid divorce, from a marital stability point of view, a woman becomes a slut once she has had more than two non-marital partners. It's not my opinion, it's probability.

Any man, entering marriage, has a responsibility to his children to try to attempt to ensure the woman he marries is stable marriage material. The fact is that once a woman has had two or more extra-marital partners she become statistically a bad potential mother.

Given that the average female partner count has now crept up to four, we are facing a social apocalypse.
Posted by The Social Pathologist at 9:29 pm 43 comments: