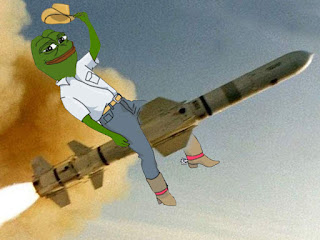 An intermission from our studies on Fascism.

Samuel Francis, recognised that the fundamental weakness of the Middle American Radicals was their failure to develop a cadre of intellectuals and leaders who would be able to implement their desired changes. He recognised that the absence of such members in the movement rendered the it susceptible  to "decapitation" by the professional managerial class who who would co-opt and neutralise it.  The actions by the Trump administration over the past few days confirm this prediction.

For the life of me I cannot see how the attack by the U.S. on Syria serves any of its interests or the interests of the Syrian people. I actually believe the Donald Trump is a decent guy and I imagine he would have authorised the attack on "humanitarian grounds" but for the life of me I don't understand why he is so selective in his humanitarianism.  There are plenty of other places in the world where military action would bring real benefit to the suffering of the people--without threat of intervention with Russia--and yet the U.S. turns a blind eye.

And how does the U.S. action actually help the Syrian people? Assad by all accounts is the least worst of the combatants and there  appears to be a continual flow of refugees towards the areas he controls. There are no "moderate rebels", and the question needs to be asked, who then are the Americans supporting?

The only winners in this idiotic escapade are the Sunni/Turkish/Israeli axis who get to see Assad's success reversed and Al Quaeda triumph. It's a lose/lose situation for everyone else.

By all accounts Trump isn't a rocket scientist but it doesn't mean that he is stupid either. As President, his view of the world is shaped by his prior knowledge--which appears to be limited--and the current image of it which is presented to him by his advisors.  It's this indirect ability to affect the President's actions which confers upon them an indirect Presidential power.  I think many people from the non-mainstream Right have been dismayed by some of his advisory picks, principally those of his relations whose influence is disproportionate by the virtue of family sentiment. This dissident Right hasn't paid enough attention to this matter and it appears that their movement has been decapitated through by mechanism. The Neocons and the Israeli lobby are in charge again. When "Never Trumpers" like Bill Kristol are cheering Trump's actions you know that middle America has lost. Bannon's our last hope but it appears that he is grimly holding on and that his time is numbered.

Before anyone thinks I've gone all Natsoc think again. My position is that of John Mearsheimer's who does not equate Jewish as synonymous with the Israeli lobby . In fact one of the big problems for the Israeli lobby is getting enough Jewish people to get on board. This is quite simply the penetration of one government into another and directing its military and foreign policy.  During the Cold War the Russians were able to exert an enormous amount of influence on U.S. policy by putting "fellow travelers" into positions of advisory influence, thereby influencing foreign policy. Alger Hiss was an Episcopalian.

What's been really interesting to see is the limited nature of the response by the U.S. military on Assad which seems to suggest that there is a pushback going on. There's plenty of evidence that he was given advance warning of the attack and the targeting suggests that the Americans weren't really serious about going after him. It's almost as if the U.S. military was rebelling  didn't really want to get into a fight.

My own observations suggest that there a huge divisions forming in the U.S. government. The Army doesn't really seem to be that keen on adventures. The intelligence agencies on the other hand, seem to have been "penetrated" and are "gung ho", and God only knows what is going on with the Law enforcement agencies.  It's not a good picture. I think the U.S. is in real danger of some kind of civil war or military catastrophe.
Posted by The Social Pathologist at 12:20 am 8 comments: