Hostile to any comparison between Nazism and communism, some authors have sought to find differences in motivation or behavior, beyond the supposed differences in inspiration. “A young man moving in the direction of communism,” writes Jean Daniel, “is at least living with a desire for communion. A young fascist is only fascinated by domination. That is the essential difference. 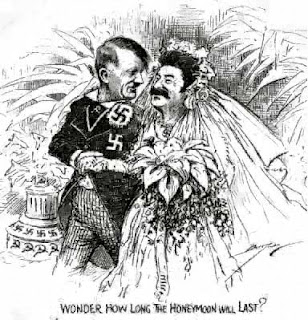 Left wing writers like to point out that Fascism is a right wing phenomenon. Never mind the fact that a study of of the origin of Fascism shows a remarkable overlap in both ideology and participants with Socialism.  Even the term Nazi is an abbreviation of the term National Socialist, so it somewhat of a mystery to me why Fascism is considered right wing.

It is the position of this blog that the social conditions in Europe in the late 19th Century gave rise to a situation which traditionalist thinking was unable to solve. The enormous increase in population, industrialisation and lassiez faire capitalism produced a disaffected populace which sought some redress from the resultant social inequities. Most people thought the existing order wrong and there was a need to change it. Traditionalist attempts were made but  ideology which gained the most traction amongst the masses was the socialistic one.  Amongst the socialists themselves, three main streams of thought emerged on how to address the social injustices. Firstly, Parliamentary Socialism, which sought to change society through democratic takeover  of state power, and secondly, Communism and Fascism, which sought to change it through violent struggle. So, just as Protestantism and Catholicism can be thought of as two different strains of Christian thought, both Communism and Fascism need to be seen as two sects of a common underlying ideology; an ideology of the left.

However, it's the differences which have always caused the most confusion,  and it's a confusion  which may lay in the fact that it is difficult to separate the two along the traditional right/left axis because of the common ideology of origin.  But the perhaps the best way to explain the differences is not along a spectrum of "Right and Left" but along the lines of sexual hierarchy; "Alpha and Beta". While I'm not the type of man to see everything through the prism of sexual biomechanics, once you start looking at things this way a lot of the pieces seem to fit quite nicely.

The Fascists were outright thugs and saw a glory in violence. They were concerned not about saving the world but about saving their own tribe. They worshiped military valour, manly struggle, competition and emphasised sexual polarity. They didn't mind a bit of inequality if it bought out the best in the tribe. Think of it like being a member in a football team. Each member wants to be a star player but the group psychology is it's us against them. We train hard, elimate the weaklings and conquer the field as brothers. It's a tailor made ideology for jocks. It's no surprise then that businessmen, soldiers, farmers and others with a strong degree of masculine autonomy would find sympathy with the cause. 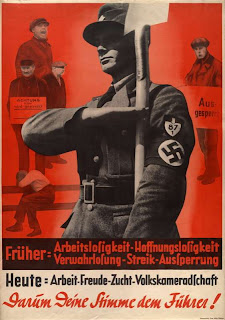 Communism, on the other hand, wanted to save the world. It wanted to include everyone into the project. It tended to avoided  the direct conflict of the thug. Instead it chose the methods of "the bitch" working to sneakily undermine it opponents through the tried techniques of rumor, misinformation and innuendo, directly attacking them when they were isolated and weak.  It valued co-operation, equality and demphasised sexual polarity. It hated competition since no one was allowed any superiority over the other. It promised a utopian future where society would ensure that everyone is a winner.  It was an escape from the the Darwinian struggle of life and the natural pecking order. One can quite easily imagine writers, artists, public servants and others who lacked a large degree of autonomy choosing the communism/socialism cause. 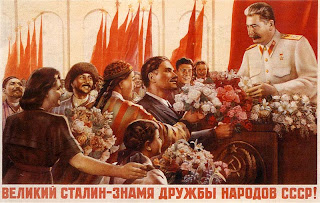 And it appears that there is some scientific data showing a correlation with social conservatism and the dark triad. Though the study has its faults, I think it has a large degree of intuitive credibility. Interestingly the study study shows a far weaker link between the dark triad and economic conservatism which also fits nicely with our hypothesis*. The fact that economic values are poorly correlated with the dark triad will mean that the individuals who possess the dark triad are not necessarily to be associated with any economic position.

Therefore, if an man is an alpha male but an economic idiot, and sees the socialistic worldview as the solution to society's problems, he will find Fascism an appealing ideology. The lower down the sexual hierarchy he goes the more Communism, and then Socialism appeal. Even today the Neo Nazi's tend to be tough skinheads whilst the socialist men...... well....... you know what I mean.

In other words. Fascism is alpha socialism.  Whilst communist/parliamentary socialism is the ideology that appeals to the beta male economic illiterate.

Manboobz of the world unite!

*Arvan did a follow up study and found that liberalism is associated with antisocial personality traits on issues such as climate change and environmentalism.  With Fascism now being totally discredited perhaps those alpha individuals who would have naturally drifted to Nazism are now finding a home in the environmental movement.

** Note for those who are totally retarded and think this post is some crypto support for the Fascists, you can go to Hell.  I regard Nazism and Communism as evils and a pox a both their houses.