I've been meaning to reply to commentator Tom for a while now with regard to a comment he left over at this post:


Of course, homophily exists, but given the massive harm it causes to humanity as a whole, I see no reason to mold society to it any more than I see a need to cater to other natural emotions such as violent jealousy[ED].

There are a ton of human impulses that society suppresses, and because man is a product of both nature and nurture, such impulses are heavily modified by experience. I'm sure that if I wasn't raised in Toronto, a heavily multicultural city, I'd be slightly discomfited by my workplace where there is no majority race, I hear Arabic, Hindi and Russian spoken around me, and the clothing styles, while majority jeans and polo shirt, also include Hijab/Abaya and the occasional sari.

Nobody here (a programming shop) blinks an eye because this is what you see every day on the street.

Yes, there are fewer cultural touchstones with my coworkers, so I exercise some cultural homophily with my personal friends (we're all hard-core computer geeks from a variety of races), but surely homophilic tendencies are no basis for the structure of society.

Or should I be agitating for a society where everyone must have read the science fiction greats before getting citizenship?

Whilst I respect Tom's comments, the comment above is in many ways akin to the argument pushed by feminists that a woman should be able to wear whatever she wants and not expect to get sexually assaulted.

Now the problem with this approach is that the concept of "reason" was rather vague. The implicit assumption was that the "reason" of the philosopher was also the same "reason" of the prole. The problem, as modern psychology and cognitive science has demonstrated, is that while everyone is capable of reason, the "quality" of everyone's reason is not the same.

An aspect of psychology that is relevant in this instance, is that of Kohlberg's theory of moral development. In essence, Kohlberg demonstrated that people's motivation for moral action is varied. At the lowest--and most populous level-- moral action is based on the avoidance of punishment and the promise of reward and its only that and only at the rarefied level of the enlightened few that it is motivated by considerations of higher ethical principle.  In other words, the reasoning of the bottom is different from the reasoning at the top yet the observed behaviour is the same.* 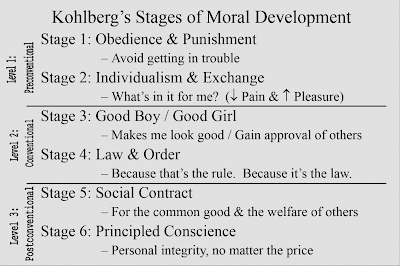 The other relevant dimension here are the latest findings from cognitive science which show that most people are "cognitive misers", even those with high I.Q., and that intuitive "logic" is default operating mode for most people.

When you meld these two findings together you find that most people's daily operations are intuitive in their nature and constrained by external factors such as punishment or shame rather than "considered behaviour modulated by rational deliberation". Sure, there are people like that, but they're in the minority.

It follows therefore that if you want the masses to behave properly, especially when asking them to act in ways which are profoundly counter-intuitive, pragmatically you need to have a strong policing force i.e. state retribution or strong cultural shaming mechanisms, i.e. institutionalised religion to keep people in line.

Expecting everyone to "reason" like a moral philosopher is based upon the assumption that everyone can. This of course is a rehash of the radical equality principle of all men and fails to recognise that some men are limited in reaching this level of cognition. (Note, it's one of the ways mainstream Christianity inadvertently laid the groundwork for Liberalism.) So anyone pushing this agenda is, in a way, furthering the intellectual supposition that all men are cognitively equal.

But suppose you do accept the fact that there is an inherent intellectual inequality amongst men, how then do you regulate public morality in such an environment, especially when asking men to act in a strongly counter-intuitive way? The only way to do so is by having a strong external apparatus, i.e. Church or State threatening to punish wayward behaviour. i.e. Big Brother.  Furthermore, with the collapse of "cultural constraints" the void for regulating behviour needs to be assumed by the state, thus,  radical liberalism necessitates a powerful state regulatory apparatus to provide a check against the intuitive tendencies of the masses.

This is a "high energy" state of affairs. The state needs to be constantly maintained and strong in order to keep society together, should the state falter the intuitive impulses of the masses will reassert themselves. In countries like the U.S., where there is greater degree of individualism and multiculturalism, when the lights go out and the police go on strike, anarchy starts brewing quite rapidly. On the other hand, in countries such as Japan, where there are strong cultural "policing" mechanisms, and more realistic understanding of human anthropology, failure of state does not necessitate a failing society.

The former Yugoslavia was a classic example of this. Comprised of six different ethnicities, most of which did not want to live with each other, the only way the state could be kept together was through a strong totalitarian regime. Interestingly, the people most able to "get along" where the educated "cognitive" types whilst the masses maintained their grudges.  The failure of the policing state meant that natural demographic forces could assert themselves,  the rest is history.  Yugoslavia failed because it needed a strong state to force Croats, Serbs and Slovenes to be Yugoslavs and it was an example of trying to fit men to the model instead of fitting the model to men.

Stable "low energy" states are those which intuitively coalesce, where human nature is not taxed by its membership of them. A state based upon the "intuitive" emotions,experience and morality of the people is far easier to maintain than one which is pushing against human nature all the time. Catering for homophily which is near universal is different from catering to violent jealousy which is exceptional. Equating the two is wrong. A society which pushes against violent jealousy is going to require less "policing" than a society that pushes against "homophily" and is thus more stable.

Stable societies are build on an understanding of human nature and not a rejection of it. Still,  there does need to be some regulation of its more primitive aspects but the approach should be one based on the minimal amount of intervention necessary, not wide scale social engineering. Incidentally, this is one of the reasons why Puritanical societies go feral once the thumbscrews are released. Human nature only stand so much deformation.

When the feminists argue that a woman should be able to walk down the street wearing whatever she wants without being molested, they're uttering both a moral truth and an anthropological lie. It's akin to saying men should be able to transcend homophilous instinct. The problem with both both statements is that the fail to acknowledge the reality of human nature and and the human capacities to transcend them. If, however, this state of affairs was able to be achieved would necessitate a strong police state which would need to be maintained in order for there not to be a lapse into anarchy.

Stable societies are based upon the  recognition of human nature as the foundation of them. Not asking too much of people means that when the pressure is put on society, it doesn't go bad. Furthermore, if you're going to police a society, you're better off doing it through culture rather than the police state. I'd rather a minister in a church hall than a policeman in my bedroom.

*Note, the relationship of demographics and Kohlberg's theory of moral development is complex. Since this is a blog and not a academic paper I've tried to keep things simple.