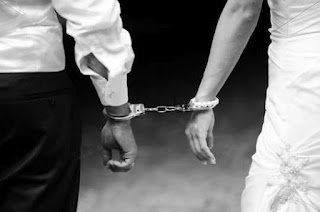 
SP, Charity, for example, does not permit divorce (at least frivolous ones)

Ahh, the seeds of relativism are planted deep! Even SP's blog offers no relief...:-)

Now, I really didn't want to get into a theological discussion about the matter of marriage, but if you take the approach of charity as "a perfecting force" instead of an emotive type of benevolent act,  several contentious theological issues can be approached from a fresh perspective. I'll just stick to marriage for the moment.

Firstly, without any reference to the text, if charity is a benevolent perfecting force, it follows that charity will always attempt to restore something that is broken or deficient. The operation of charity on a Christian marriage, in other words a union blessed by charity, will be to keep it together.  If we take the view that God is Charity, i.e Deus Caritas Est, then there is no way in hell that God will approve of divorce, because His very nature is to perfect, not to destroy. It's not only that He does not permit divorce, he can't actually divorce anything because of His nature.

Now, I wasn't hoping to put up a defence of Catholic teaching, ruminations on Houellebecq's  "problem of love" led me to this conclusion, but the fact of the matter is that charity can never permit divorce and the Catholic approach to divorce displays the correct understanding of the nature of God. God can't break any sanctified union. No reliance on scripture is necessary.

I was wrong. There is no way that divorce of any kind is permissible. Mea Culpa.

Still it is important to test my thinking. In my previous post, I mentioned to commentator Spandrell that the way that the intellect can gain an understanding of God's will for things is either through revelation or reason. As I get older I tend to put more trust on revelation than reason, and with regard to the subject of divorce, pretty much all of the New Testament confirms the prohibition of divorce.


But I say to you, that whosoever shall put away his wife, excepting for the cause of fornication, maketh her to commit adultery: and he that shall marry her that is put away, committeth adultery.

Like everyone else who read this passage,  I concentrated on the exceptive clause, "excepting for the cause of fornication",  believing that this provided some "wiggle room" for divorce. But on further reflection, thanks to mdavid, now I think that I've read this passage all wrong.

Now the Greek word from which fornication is derived from is pornea.  The term pornea seems to have a wider connotation of sexual immorality including adultery, whilst the specific biblical Greek word for adultery is moichatai. It's interesting that the text uses both words and seems to be an indication of intention in precision of meaning. This is important.

Now,  if we analyse the text by first getting rid of the exception clause we get;


But I say to you, that whosoever shall put away his wife....maketh her to commit adultery and he that shall marry her that is put away, committeth adultery.

It would also seem to imply that the involuntarily divorced wife may not be full culpable for any future adultery but anyone else that sleeps with her is. Hence if she is kicked out of the house and shacks up with another man she still sins, but maybe not mortally. (This has significant practical implications for innocent divorce victims but I'm speculating here, and could be way out of whack.)

If substitute a more expansive phrasing of the word pornea  into the exception clause we get;


excepting for the cause of her own sexual immorality( including her own adultery),

We see that within the exceptive clause agency is attributed to the woman solely.


But I say to you, that whosoever shall put away his wife, excepting for the cause of her own sexual sins, maketh her to commit adultery: and he that shall marry her that is put away, committeth adultery.

The way I interpret this is Jesus saying, if you divorce your wife, except with case of her freely chosen sexual sins, you will be partially responsible for her future adultery. In other words, this passage is not about justifying divorce but rather an exposition of how Jesus will assign blame in the case of a separation.  If a woman commits adultery or some other freely chosen sexual sin, she will bear the guilt, otherwise the initiator of divorce will bear some of  the responsibility.

And finally to put a nail in the coffin, so to speak;


and he that shall marry her that is put away, committeth adultery.

If the traditional non-Catholic interpretation of this passage was correct, in that divorce was permissible as a consequence of some type of sexual sin, then this last segment of the text would be contradictory. Since, if she was lawfully put away by right of the exception, it would be impossible to commit adultery with her if married to her.
Posted by The Social Pathologist at 11:45 pm 7 comments: