Recently, the local paper ran an interesting article on a woman's regret on getting tattooed. Whilst the local paper is not of any real quality, (English readers, it mirrors itself on The Guardian) every now and then an insightful article slips past the censorious eyes of the liberal editors.

Now, like any person with half a brain I deplore tattoo's. Their widespread acceptance amongst people who should know better is proof of middle class prole drift.

I have always considered them declasse, no matter how artistic. The presence of one on a girl, no matter how small or discrete was immediate deal breaker. Not just because tattoos were the mark of the society's dregs but more so because it was character revealed in action. What a tattoo said about a man/woman was not only about what type of man he was, but of the type of man he had shown himself to be. Now it is true that people change over time, and that everyman is capable of all vices, but we presume a man of good character until he has proven otherwise. The tattoo is a permanent mark of bad judgement.

Initially, my partner at the time agreed that we should take the plunge together on my 30th birthday. In those days, tattoos were still mostly the preferred accessory of sailors, wharfies, prisoners and the like, but I figured that it was OK to get a tattoo as long as you didn't look like a person who would have one.

Fast forward again and I am picking my daughter up from school. At the school gate, the only other people with tattoos are fat and toothless and complaining about the price of fags.

I suddenly realise that I am a member of a club that I did not intend joining.

These days, my tattoo has faded, just like my desire to be as daring and alluring as Milady.

Like every other fashion choice you make, tattoos tell people at lot about you. But sometimes they tell people who you were, rather than who you are.

I found this article interesting on so many levels. Firstly, the author is at pains to ensure that while she adopts the mark of the declasse, she herself is not. Ummm....No. You see, from the vantage point of the unmarked there are only two types of people: Those tattooed and those not. Secondly, she sees a distinction between herself and the fat,toothless hags she clearly despises. I wonder if the other women sporting tattoos were slim, rich and well dressed whether she would complain about belonging to that same group. The problem with this woman is not that she has changed, rather it's the group that she now aspires to has. She's still the same person; an impulsive egotist still concerned about her social status.

Theodore Dalrymple does a wonderful demolition job on the tattoo culture, far better than I can. But in the end, he comes to the same conclusion I did when searching for a mate; the tattooed are best avoided as their self inflicted brand is an outward sign of character flaw.

Note: There are very limited exceptions to the above post. Certain traditional cultures made them part and parcel of group identity. 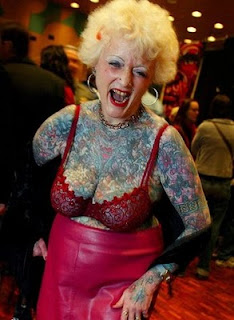 Posted by The Social Pathologist at 9:16 pm 21 comments: