The Centers for Diseases Control published a document which contained divorce data from the 1995 National Survey of Family Growth. Entitled, Cohabitation, marriage, divorce, and remarriage in the United States, it was able to provide data on divorce probabilities according to individual educational and economic characteristics.

Below are some pertinent extracts to our previous posts. (Click on image to enlarge)

Many of the detractors of the Heritage Foundation paper felt that its findings could be explained away by educational/socioeconomic factors. They are wrong.

What's interesting to note, is that ooking at the above table, the risk of divorce varies the most according to economic status. The difference in raw probability from the upper and lower third economic classes is 0.34, whilst the difference between the upper and lower educational categories is 0.23. In real life the two characteristics, income and education, are closely correlated and it would be quite reasonable to assume that the 0.23 subsists within the 0.34. However the Heritage study shows a 0.63 probability variance across cohorts, therefore socioeconomic factors cannot explain all the variation. 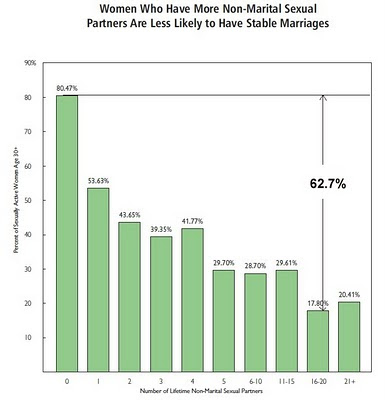 Now, this chart, gives us the socioeconomic and educational breakdown within each sexual-partner cohort. 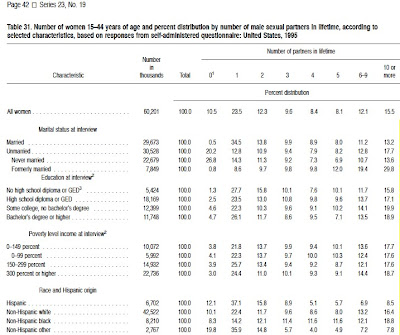 In order to determine the confounding effect income has on the cohort divorce rate we must sum the weighted risks of each economic group from the cohort and see how it varies from the average.

If the entire greater-than-10 partner cohort were composed of poor people, we could look at the marital risk chart and see that they have 0.796 probability of divorce(%20.4 are married), we would then subtract 0.22 due to socioeconomic effect, since the the lowest income third have a divorce probability of 0.65, which is 0.22 above the national divorce rate. We know that this increased risk is due to the economic circumstances in which they are in so we subtract that from the 10+ cohort figure to arrive at a figure of 0.576. On the other hand, if the group were composed entirely of the rich, we know that wealth protects against divorce by a probability of 0.12, therefore the adjusted probability would be 0.916.

Using this method we can adjust for income effects in each cohort by determining the cohorts economic divorce risk and comparing how it varies from the average.

The same adjustment can be made for educational status by such a method.
(Click on image for large view) 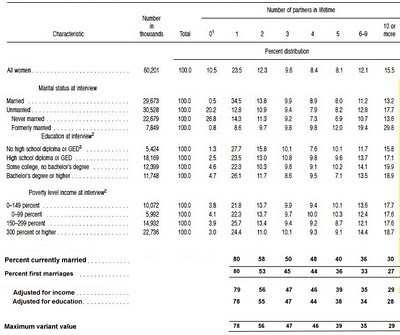 9.3% of current marriages were remarriages. I distributed these remarriages evenly amongst the 2+ cohorts, any error arising from such is likely to be insignificant in real world terms. Also since I could not control for income and education at the same time, I've presented both corrections. In the real world, income and education are closely correlated so I would not expect to see much variance across the figures however in an effort to capture any socioeconomic/educational affect, the Maximum variant value represents the calculated value which gives the lowest divorce rate. (i.e maximising the impact of socioeconomic/educational factors on these calculations)

What's fascinating to observe, is that the CDC data on cohorts does not generally show a preponderance of one statistical group amongst the others across the partner cohorts. For instance, in the 10+ crowd, there is a slight preponderance of the educated and wealthy over the uneducated and poor, yet the cohort divorce rate for education and income were 0.44 and 0.45 respectively, indicating a variance of 0.01 and 0.02 from the national average. The largest variance was found in the 2 cohort group where 0.03 probability increase of divorce above the national average was predicted due to economic factors.

What this data shows is that sexual partner count is a very good--in fact uncannily good--predictor of the risks of divorce.

From a statistical perspective, the marital dissolution risk of a woman receiving welfare and a wealthy promiscuous educated woman is about the same.

(This post was revised at 20:00 Australian Eastern Standard Time)
Posted by The Social Pathologist at 7:54 am 33 comments: