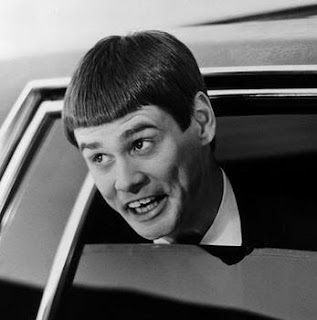 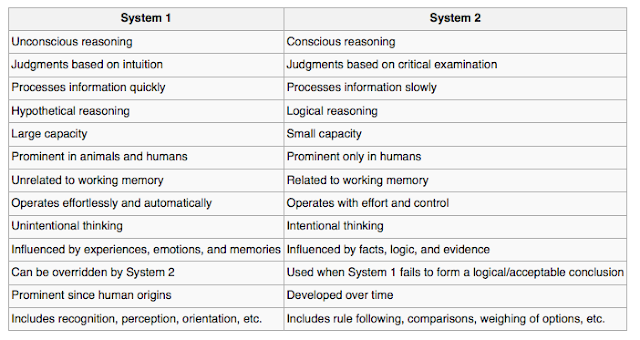 Posted by The Social Pathologist at 11:26 am

I think its important not to think of type 1 thinking as "inferior". Type one thinking leads to plenty of very good outcomes, while type 2 thinking is very risky (can end in outcomes far worse then type 1). After all, a prole could never come up with a Krugmen or a Caplan.

Personally, I think truth has to draw on all our faculties. Reason, experience, research, faith, intuition, etc. No one should be raised to far above the others. And even if we marshall all our faculties perfect knowledge is impossible for fallen man, so we must approach the search humbly.

Wow, that was quick.

They said very close to what Aristotle defined as rhetoric (emotion-based) and dialectic (reason-based).

Jesus has nothing to do with this analysis, so the "sheep" don't fit in either category, but run the gamut of human types. Unless you are prepared to say men like Galileo and Isaac Newton were mindless and unreasoning.

There are a lot of ironies in this topic.

Pray tell, what mental mountains are you moving during the day while the rest of us poles are chuckling at "ow my balls" videos on the toilet. That is, besides the great intellectual effort you go to to enumerate the ways you would like to think separate you from the mouth breathing proles.

About 90% of the time these posts come off as the conceits of a teenager who just finished reading the fountainhead, with some supplemental reading in advanced derision to flesh it all out.

I think there is a certain class of people who are so predominately Type 2 in mindset that they have difficulty performing mundane, everyday activities, all of which are completed from Type 1 thinking. For example, Chesterton found it nearly impossible to navigate through town, and would often get a lot of his writing done by writing whenever he missed a train ride.

Intellectual and artistic geniuses have been known to be failures in daily living: both Plato and Confucius were given administrative posts, according to tradition, and did pretty dismal jobs running their cities. Schopenhauer had a wealthy merchant for a father, and Schopenhauer spent almost all of his life living off his inheritance, because he found practical work to be insufferable. I am sure other readers could share with me dozens of examples of men who were failures in their day to day lives, or in making sure that things worked properly, who were also geniuses of superlative quality.

A genius may very well be someone whose Type 2 thinking gets in the way of their day to day lives, and largely need other men to assist them monetarily and women to prop them up emotionally to produce their intellectual work. Wagner could only finish Siegfried, Twilight of the Gods and Parsifal once Ludwig II paid off Wagner's debts and living expenses, for example.

I honestly get the impression that Jesus wasn't too impressed with the intellectual capabilities of the average Joe. That's why he said "feed my sheep", not debate with my moral philosophers. Reading the New Testament, I get the feeling that there were quite a few Facepalm moments.

Secondly, you've gotta remember that Christ was killed after a democratic vote. Pilate gave the crowd a choice between a criminal and the Son of God: the crowd chose the criminal. Reflect on that..........deeply.

Loving your children is not incompatible with having a low opinion of their intelligence. I would have died for my kids but I wouldn't trust them with filling out my tax return.

New to this blog?

I'm sorry I offend your prole egalitarianism....nah....actually I'm not. You see, I like civilisation and the benefits in brings; water, penicillin, electricity and am keen to preserve it. I'm sick of your type taking control of the reactor with no idea or no interest in wanting to know how it operates, yet fundamentally asserting its right to do so.

If you want to know what is ailing western society go look into a mirror.

I agree with you, but you're thinking in dichotomies. Both the hyper-intellectual and the sentimental moron are mutations of the ideal human type. The Renaissance, or cultred man is the ideal. The basic intuitions that so powerfully influence our type 1 thought are what give us our humanity but they don't protect us against error.

there are culpabilities in all corners of society, but most of it belongs to the elites. Where elites lead the massess, most of the massess go. The only half-rationality, common sense and tattered culture that is left is among populist movements, which oppose the politics of elites. Power framework of the system operates in the following way (Damon Vrabel, the lecturer, is a Harvard educated ex-Wall Street insider):

The negative processess we see in our societies have all happened before:

That video of the first link has been removed. Here is the same video in operation:

Life for the cognitive miser is less about thinking and reflection but more about doing "what works" to get by in life. Short term solutions which deliver results but which are ultimately destructive are favoured over long term ones in which reward is delayed. fitted bed sheets sale , california king comforter , buy egyptian cotton , fancy nancy twin sheets , bed sheet set with quilt , vicky razai set price , cotton sofa covers online , velvet flannel sheets Practical issues dominate over the abstract and things which are emotionally congruent with beliefs are reinforced. Responding more than understanding is the order of the day. What works now is more important than what will keep on working indefinitely.