Australia is blessed with sun to the degree that Canada is blessed with snow. It's exceptional for it not to be sunny here.  As a consequence, Australia is "blessed" with extraordinary high rates of skin cancer compared to the rest of the world. The pale skin of the Europeans (especially the Aryan types) is prone to mutagenisis when exposed to copious Australian sun.  Fortunately, most skin cancers are relatively benign, and a good part of the average GP's practice consists of cutting out skin cancers.

With the exception of people who have rare genetic conditions, the risk of skin cancer is correlated with sun exposure. In fact we can roughly plot the risk/exposure graph as follows. 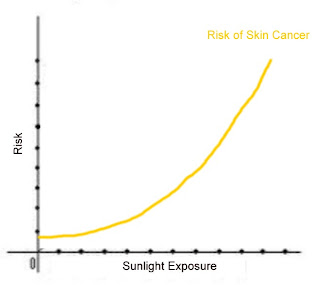 From about the mid 30's to the late 70's the local culture strongly promoted sun exposure and as a consequence, the skin cancer rates were quite high. Concerned individuals lobbied the government and a quite successful skin cancer awareness and protection campaign was launched.  Dermatologists and a government funded campaign advised people to limit their exposure to the sun.  It was a quite successful program and people are now far more aware of skin cancer than before and widespread protective measures are employed.  As a consequence, skin cancer rates in young people have begun to stabilise, the old are still suffering for their previous sins.

In the mid 90's however it began to be noted that more and more people were becoming Vitamin D deficient.  Now Vitamin D deficiency contributes to osteoporosis which most people think is relatively benign. Yet the disease burden of this condition is quite significant, resulting in fractures, pain and a quite severe reduction quality of life. Endocrinologists were to first to notice this affect,  and their solution was to get more sun.

In fact if we plot the risk of Vitamin D deficient osteoporosis vs sunlight we get the following graph. 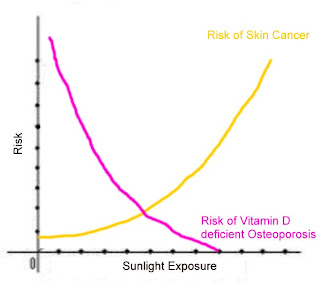 
A lot of the conflicting "medical advice" that people get from the mainstream media is due to the above phenomenon. Given the "connectedness" of biological processes. Altering one, results in effects on other systems.  The source of this conflicting medical advice is from the medical profession, particularly the specialist component of medicine.

The nature of the medical profession is such that when expert opinion is required on any matter, the authoritative words of a specialist in the field is required. This professional, who is very knowledgeable in their particular field, looks at the human being from the vantage point of that particular field, offers advice from the vantage point of that particular field. So when the news article is about skin cancer, a knowledgeable dermatologist is trotted out who advocates less sun. Two weeks later when the osteoporosis is the flavour of the day, and endochrinologist is trotted out who advises people to get more sun. The public are confused.

The problem is of course, specialisation, which is another word for cognitive compartmentalisation. It takes a generalist to see what the specialist can't. A generalist would ask,  what is the systemic risk vs sun exposure? A crude graph could be drawn as follows: 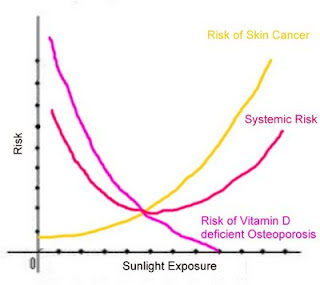 Here we see that minimum risk is somewhere between the two extremes. Trying to avoid one pathology by avoiding all the risk factors associated with it frequently increases the risk of a different one.  Zero risk is impossible, and trying the achieve it is likely to lead to more pathology. The trick to healthy living is to minimise risk, not avoid it all together. It's the common-sense philosophy of the golden mean.

As a side issue. It would appear that the healthy human beings need a reasonable amount of sun exposure on their skin to keep them healthy. Excessive Victorian Era and Modern Islamic prudery are objectively unhealthy. People need to show a little flesh to be healthy.
Posted by The Social Pathologist at 10:52 pm

So what is the equilibrium point? Shouldn't we just take that point and apply it, so we can achieve maximum benefit from the cost-benefit analysis?

From personal experience, I think 1-2 hours max would be ideal. Most people don't realize how much sun exposure they receive while commuting to work or being outside on cloudy days.

I never understood why being tanned was considered so posh in the US. It does show conspicuous consumption by implying salon membership or owning a personal tanning bed. Also maybe yachting or playing polo.

However, for much of the world being tanned is seen as increasing the risk of skin cancer and performing outdoor manual labor. Thus avoided by upper-middle class.

You won't see tanned models walking on the runways in Italy, France, Japan or the UK. Can you explain this phenomenon?