Blessed are the Engineers.

Not many people know who this man is. 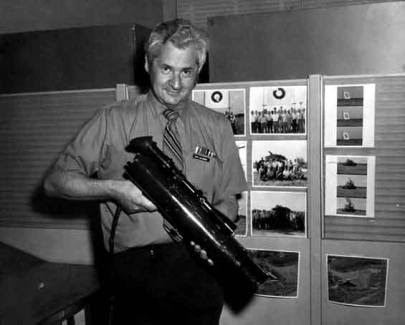 His name is David Salonimer, an engineer who worked at the U.S army's Redstone proving ground. He is the father of the modern laser guided bomb. You have probably never heard of him.

His idea, with the collaboration of others has probably done more to reduce human suffering in warfare than any of the peace treaties or political gestures at disarmament since the Second World War. By improving the accuracy of weapons by several orders of magnitude he has spared countless people from becoming collateral damage. He has also probably spared many soldiers and airmen from death and massively increased the military power of his country. In this age of military barbarism he has probably done the most to lessen the miseries of war.

Part of the reason that that area bombing was implemented was because the accuracy of bombing was so low that an inordinate number of large high explosive bombs had to be dropped on a target in order to achieve a probable hit. Given that pinpoint precision is now a real ability of armed forces, military forces have now begun to use the weapon of David, albeit in a smart form. The smart rock.

This guy is an all out legend, yet no one knows of him. As far as I understand it he has won a few engineering awards but that is it. Al Gore gets to win the Nobel peace prize for being an environmental windbag while the man who actually save lives gets passed over. I personally feel he comes second to Henry Dunant in reducing the suffering in war. The world honours its sinners and passes over its saints.
Posted by The Social Pathologist at 7:59 pm

I know this person quiet well.He is proud of U.S army.Thanks for sharing about this person.

I thought he had passed away. If you do know of him, I'd be pleased if you would let him know of my little tribute.

Dave Salonimer was my uncle (mother's brother). He has passed away, but our family is obviously extremely proud of his legacy. He was a humanitarian, not only in his career, but in retirement as well. He had a talented seamstress whom he paid to create beautiful hand puppets, which he regularly handed out to children in hospitals who were dealing with tough illnesses.

Ruth, thank you very much for writing. I hope I have honored him him some small way. I think you and your family should be justly proud of his achievements. I think that despite our best efforts war will always be part of the human condition and any attempt to reduce its horrors and miseries is to be applauded and its enablers hailed. His everlasting tribute will be in the thousands of men who's lives and limbs will be spared , the thousands of women who will not lament the loss of their loved ones, and in the children who's lives will be filled by their fathers otherwise lost. May he rest in God's eternal peace and live in his everlasting glory.

Thank you for remembering my father.

He should be remembered more often.

I am a nephew of David Salonimer. In the 1990s I became a volunteer helping Vietnamese refugees establish a new life in the Kansas City area, where I live. My uncle's "smart bomb" was first used in the Vietnam War, which saved many lives. It also affected the timing of many of them immigrating to the U.S., enabling me to meet meet and help some of them in a very endearing and beneficial association. My uncle has passed on, but I walk on his shoulders.

Hi Lawrence, you should be quite proud of him. I have done a recent post on Harold Gilles, a pioneering plastic surgeon of the First World war. The article links to distressing images of war injuries and speaks of the ruined lives these men had as a result of them. You Uncle prevented injuries like these, and their consequences. Meditate on that for a moment, it is testimony enough of the greatness of his invention.

I definitely have known this man...he was my brother. I am very proud of Dave's accomplishments, particularly his invention of the "Smart Bomb". I have loved him dearly.
Esther Salonimer Price

Thanks for dropping by Esther. You have much to be proud of.

I am proud to have been able to spend time with my uncle, Dave Salonimer. He was a wonderful, gentle and bright man with a wicked sense of humor. Uncle David, you are very much missed. Thank you for posting a tribute to this unique genius.

I really like your blog.. very nice colors & theme. Did
you design this website yourself or did you hire someone to
do it for you? Plz answer back as I'm looking to design my own blog and would like to find out where u got this from. kudos
Also visit my blog post ... private krankenkassenvergleich

Valuable info. Lucky me I discovered your site by accident, and I am stunned why this coincidence did not took place earlier!
I bookmarked it.

Hey There. I found your blog using msn. This is a very well written article.
I will make sure to bookmark it and come back to read more of your useful information.

my site private versicherung
Feel free to visit my web-site :

Hmm is anyone else experiencing problems with the images
on this blog loading? I'm trying to figure out if its a problem on my end or if it's the blog.
Any feed-back would be greatly appreciated.
Check out my website :: Krankenversicherung Billig

Hi there, every time i used to check website posts here early
in the morning, because i like to learn more and more.
My website compare home equity rates

Hi there, every time i used to check website
posts here early in the morning, because i like to learn more and
more.
my site: compare home equity rates

Hmm it seems like your website ate my first comment (it was super long) so I guess I'll just sum it up what I wrote and say, I'm thoroughly enjoying
your blog. I too am an aspiring blog blogger but I'm still new to the whole thing. Do you have any suggestions for newbie blog writers? I'd certainly appreciate it.
Here is my page : affiliate marketers

Today, I went to the beach with my kids. I found a sea
shell and gave it to my 4 year old daughter and said "You can hear the ocean if you put this to your ear." She put the shell to
her ear and screamed. There was a hermit crab inside and it pinched her ear.

She never wants to go back! LoL I know this is entirely off topic but
I had to tell someone!
Feel free to surf my website ; Help For Starting A Business

Useful info. Fortunate me I discovered your website by accident, and I'm surprised why this twist of fate did not happened in advance! I bookmarked it.
Here is my blog post ... kann ich von der privaten krankenversicherung in die gesetzliche wechseln

I do not even know how I ended up right here, but I thought this put up used to be
great. I do not realize who you're but definitely you're going to a
famous blogger if you happen to aren't already. Cheers!

This is my first time pay a visit at here and i am genuinely impressed to read everthing at single
place.

It's in reality a great and useful piece of information. I am satisfied that you simply shared this helpful information with us. Please keep us informed like this. Thanks for sharing.

I every time spent my half an hour to read this blog's articles everyday along with a cup of coffee.

Attractive section of content. I simply stumbled upon your weblog and in accession capital to assert
that I get actually loved account your weblog posts.
Any way I will be subscribing for your feeds or even
I success you get admission to consistently fast.

It's really a nice and useful piece of info. I'm glad
that you simply shared this useful information with us.
Please keep us informed like this. Thank you for sharing.

I must thank you for the efforts you have put in penning this blog.
I'm hoping to check out the same high-grade blog posts by you in the future as well. In truth, your creative writing abilities has motivated me to get my very own blog now ;)

Can I just say what a comfort to discover someone that truly knows what they're discussing over the internet. You certainly understand how to bring an issue to light and make it important. More and more people should read this and understand this side of your story. I was surprised you are not more popular since you certainly possess the gift.