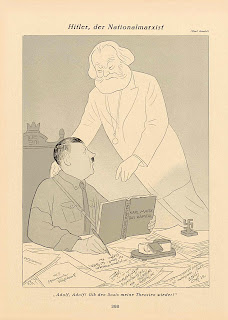 One of the reasons I harp on so much about the concept of Truth as a foundational principle of the Right is because it serves as a litmus test helping differentiate the Right from the pseudo-Right.  What I mean by the pseudo-Right are ideologies and positions which appear Right wing but actually aren't, and it's my belief that the pseudo Right is perhaps the most dangerous threat to the resurgent right  as the danger from it is subtle and not easily recognised.

Most people have an intuitive grasp of what it means to be "Right" however intuitional approaches to the subject lack a fair amount of precision, and this ambiguity of meaning leaves a lot of room for error to creep in. Furthermore, the conflation of the Right with Conservatism, just serves to make the problem worse.

Reality calibration is a prerequisite of successful action. If we define the Right as those who uphold the Truth, then the anti-Right will be those who uphold some form of error. Right politics, viewed through this definitional understanding, ceases to become an issue of Right vs Left, rather it's an issue of Right vs wrong. However, current definitions of Right and Left seemed based more on inutitional approaches rather then objective ones. This way of tackling the classification is rather wooley and leaves lots of room for error to creep in. Defining the Right as a sort of Anti-Left--makes no demands on reality calibration and does nothing to protect the Right classified ideology from holding positions which are flat out wrong.  Intuition is not infallible, and as the Master teaches, one can fall from both the right AND left side of the narrow path.

Indeed when you think of the "Right" or  "Conservatism", several intuitive concepts come to mind; the respect of tradition and place, social order and homogeneity, a preference for orthodoxy and an extremely limited tolerance for novelty, disorder and deviancy. Thinking about the right intuitively tends to result in a list of features which are associated with the concept without actually defining it. What you end up with this approach is not a definition but a laundry list of features which feel "Right," and any ideology which expresses these features is thus classified accordingly.

To be conservative, then, is to prefer the familiar to the unknown, to prefer the tried to the untried, fact to mystery, the actual to the possible, the limited to the unbounded, the near to the distant, the sufficient to the superabundant, the convenient to the perfect, present laughter to utopian bliss.

Nicely written, with a list of features, but no definitional understanding.

However, using this laundry list approach results in some quite bizarre results.  The Politburo of the Brezhnev era, could quite rightly be classified as the "right or "conservative" faction, opposed to the progressives of the time, despite espousing an openly Marxist vision of the world. Stalin, who felt that homosexuals were degenerates would likewise using this approach be classified as of the right. On the other hand, Pope Francis, who has not changed one iota of doctrine, but is favour of some innovation, is frequently called out as a Commie on the more Traditionalist web spaces. Using Oakshott's definition,  Pius X and Leonid Brezhnev would both be classed as "Rightists" or "Conservatives."

Clearly we have a problem.

What really becomes apparent when you look at mainstream classifications of Left and Right, is that the polarity refers less to substantiate ideological positions than it does to where the parties sit with respect to the big five personality traits. This is why National Socialism and Traditionalist Catholicism get lumped into the same group because, superficially, they posses traits which are associated with the right in the mind of the cognitive miser. Never mind the fact that they both rest on ideological substructures which are inherently hostile to each other.

The problem with the associative approach to the definition of the Right, is that anyone can qualify as Right, as long as a critical amount of associative features are present in their ideology, no matter how wrong everything else is. 1488'ers and Paleoconservatives are thus "Right wing" even though they are hostile to each other. The victim in this state of affairs is Truth itself. Nationalism, for example, which I believe rests on some pretty solid psychological and biological facts, gets smeared though guilt by association with the excesses of 1488'ers making it difficult to raise as a legitimate subject of discussion. Furthermore, some ideas of the Left, which may have some legitimacy to them are out of bounds because they are not "associated" with the Right.

If you look at this from a metahistorical approach, you can see the role of the Left is to pummel the Truth from the outside and the role of the pseudo Right is to undermine it from within, and part of the reason why we have not been able to mount a successful defence is because we cannot delineate friend from foe because we don't know what the rules of membership are.

Posted by The Social Pathologist at 11:14 pm

This is excellent. A crucial distinction that needed to be made. I posted it on Farcebook.

The left is domninant. So we have the left, and we have not-left which is all lumped together and called right.

I basically agree with you conceptually, but I don't see a "resurgent" Right apart from the pseudos. The ortho Right is content to live under progressive rule as long as it remains comfortable.

Thanks. I think the Ortho Right has been thoroughly emasculated. No hope there.
Still, I think there is a lot to motivate a resurgent Right operating within the Spirit of truth. Human nature is capable of greatness.

chedolf said... the pseudo Right is perhaps the most dangerous threat to the resurgent right. I basically agree with you conceptually, ...