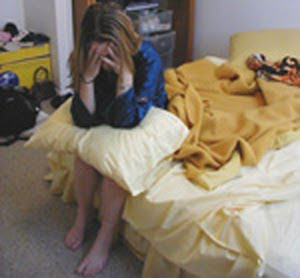 A while ago I posted some musings on the nature of modern love. I think one of the reasons divorce is so high at the moment and relationships so transient is that the approach that people take when it comes to marriage. Presently, lots of people enter marriage selfishly, seeing it as a beneficial institution and that their partner a source of utility. In fact, one of the most off putting things about the evo-bio community is that their understanding of marriage is formulated along these lines. Their justification for marriage being an "exchange" of goods. At the time I was grasping for a terminology which would adequately express what I saw as the pathology in modern relationships. A few days ago I was browsing through Poetry of The Flesh's blog and stumbled on this quote which seemed to be what I was looking for.

I see a lot of glorifying of feminity, of women encouraging others to take control of the relationship they are in, the use their feminine games and wiles, to withhold, until they get what they want. And these things work on most men.

Rules like the man should always pay for the date.
Rules like until he proposes, you're allowed to date and sleep with whoever you want.
Things that tell you it's okay to pout, to withhold sex, to expect him to read your mind and grovel.
To throw a fit if he doesn't remember your two month anniversary.
Lessons on how to get him to pay for everything.
On behaviors you should expect from a man.
To know if you're in a good relationship.
And those Cosmo articles that make me want to use the glossy edges of the magazine to slice open my own wrists before I would suffer through reading them.

These things make being female sound like being cattle at an auction, where instead of checking health, they check feminity expressed through how much a woman can beta-bitch her man.

It's not a partnership, only a symbiotic relationship between different kinds of parasites, if the man is lucky. If he's not, it's more like he's got a growth of mistletoe on his branches, and it's not looking for a kiss. (My emphasis)

Parasites live off their hosts, without regard to the host's well being. The only interest of a parasite is its self-interest. When the host stops giving it what it wants, it leaves; or if the parasite is particularly malignant, it will suck the life out of the hosts without any regard to it.(Modern woman in divorce). The psychological outlook of the parasite is simply what is in it for me.

A lot of "love" is this type of love. The benefit that this type of parasite gets from a relationship is the hedonistic pleasures derived from the host. When the host stops being pleasing the relationship stops. It's important to understand that this type of person's love is the love of what they can get from you, not the love of you. It's a selfish love. One can see how two such people can get together. Initially, both see qualities in each other from which each derives pleasure, and as men are drawn to pleasure, both are attracted to each other. There is proximity but no bond. But over time the as the pleasures are habituated their intensity is lost. Slowly the attraction fades, and the parasite moves on till it can find someone else to feed its hedonistic appetite. Two strangers in a one night stand are proximate yet alone, there is no connection. Together yet apart.

Contrast this with the behaviour of a symbiote. This type of organism sees its well being as directly aligned with the well being of the host. This type of organism does derive pleasure directly from the host, but more importantly it derives pleasure from the well being of the host as well . A symbiote not only "consumes" it also "gives" to the host. Indeed what the symbiote gives may be out of all proportion to what it gets from the host. In a mutually symbiotic relationship each is linked to the other by the very nature of the relationship. Indeed they are obligated to each other. They may be oceans apart but they are together, since their well being is conditional on the other. Without one the other fades, they are united by their very existences.

Since symbiotic love requires at least a recognition that we have obligations to another, it is no surprise that in a culture that preaches rampant individualism it is rare. We are training our children to be selfish. The world's future lovers are going to be parasites.
Posted by The Social Pathologist at 6:08 pm 18 comments:

A few weeks ago commentator Thursday wrote an interesting piece on How Social Conservatives and Traditionalists Got It Wrong About Female Sexuality. The Thinking Housewife seems to be thinking along broadly similar lines. The Unfaithful Wife makes for good reading.

BTW, She has a very good site. Very, very Good.
Posted by The Social Pathologist at 12:06 am No comments: