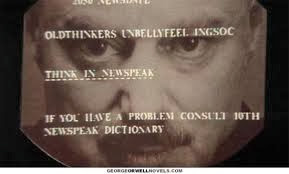 As I mentioned in my previous post,  I've gained the impression that Orwell developed his Newspeak dictionary in order to explain the cognitive phenomena he observed about him with regard to those committed to the Left.  That's not to say that the same cognitive phenomenon can't be observed amongst the Right, rather, Orwell realised that many mass movement type ideologies are logically contradictory and to sustain themselves their adherents must engage in mental gyrations to maintain their belief in them. Where I feel that Orwell erred in his understanding of Newspeak is in its relation to the human intellect of the average man.

Orwell understood Newspeak as being part of the apparatus of totalitarian control: something forced onto an unwilling and unwitting public. And to a degree it was, but what I don't think Orwell ever grasped was the devilish mechanism by which Newspeak operated.

In 1984, Orwell felt that masses would "wake up" if they had access to Goldstein's revolutionary book. It never occurred to Orwell that the masses wouldn't care as long as their animal pleasures were provided for. The Party, much like Juvenal before them, recognised that public would not care much about higher concepts such as truth or freedom as long as they were provided with bread and circuses; or in the Party's cynical terminology, Prolefeed. The average man, provided with a diet of booze, sports, porn and simple material comforts could be relied upon to never trouble his head with higher concepts such as truth, justice and love. In fact, trying to pry them away from these things in the name of "truth" would likely cause them to support the existing regime. (Note: this means that a capitalist totalitarianism, with its superior ability to provide for material goods, will be harder to dislodge than a socialist one.)

The Party understood the cognitive mechanisms of the average man better than Orwell did. Newspeak was a thought control mechanism aimed primarily at the natural intellectuals of the society, and the way it worked was by forcing intellectuals to think like the common man. Newspeak, was in essence, a mechanism to force thinking people into  "prole-mind".

Take, for example, the concept of Doublethink; the idea of keeping two mutually opposing ideas in one's head without noticing the difference. Orwell saw this mode of thought as an aberration with regard to normal thought but never realised that this state of affairs is the common mode of cognition (Cognitive dissonance) of the average man.

Or take for example the sublime concept of "Bellyfeel". Orwell describes the phenomenon better than I can;


Consider, for example, such a typical sentence from a Times leading article as "Oldthinkers unbellyfeel Ingsoc." The shortest rendering one could make of this in Oldspeak would be: "Those whose ideas were formed before the Revolution cannot have a full emotional understanding of the principles of English Socialism." But this is not an adequate translation. ... Only a person thoroughly grounded in Ingsoc could appreciate the full force of the word bellyfeel, which implied a blind, enthusiastic, and casual acceptance difficult to imagine today.

Orwell was trying to express what cognitive neuroscience is only now beginning to formalise.  In trying to understand the blind enthusiastic support Democrats have for Obama, the statement "Democrats bellyfeel Obama" is a far more accurate understanding of the pseudo-cognitive process involved in their support of the President than, "Democrats give their full and enthusiastic support of the Obama presidency after a careful consideration of his policies". "Gut-instinct", more than reason, is mass-man's mechanism of political orientation. This is why Fascism and Socialism are better understood as appeals to the "gut-brain" rather than logically and empirically justified modes of political thought. Orwell really needs to be recgonised as the father of modern political neuroscience.

Totalitarian regimes cannot solely rely on oppression for their survival, they also need to rely on some measure of co-operation amongst the populace. The way they do this is by exploiting the cognitive miserliness of the average man. The five minutes of "hate", the glorification of Big Brother, the endless propaganda all work by exploiting and conditioning System 1 thought processes. Newspeak was a language which forced those of any intellectual ability to think like the average man thereby rendering them susceptible to the cognitive conditioning techniques.  To think in Newspeak is to think like a prole and avoid System 2 thought.

Orwell, like most other left wing intellectuals, never fully appreciated just outside the mindset of the proletariat he was. Though a committed Socialist who felt that he belonged to the "workers", there is plenty enough evidence that he had a hard time mixing with "the people." He just simply wasn't one of them. His understanding of prole stupidity, based upon his won frame of reference, was that Newspeak was "forced" onto the proles, whereas, in reality, it was their natural mode of thought(System 1). Orwell's fundamental misunderstanding of Newspeak lay in the assumption of what I call the  rationalist fallacy.

The rationalist fallacy assumes that the average man is "rational" when it counts. The problem is that average man is not, cognitive miserliness is the norm. Therefore any system of thought or organisation which relies on the rationality of Joe Average is going to fail in the long run. The problem is that a lot of mainstream conservative thought is based upon this premise which in turn undermines its own survival and helps feed the leftist beast. Any Conservatism which believe in the right of the cognitive miser to choose is a dead man walking. This criticism of the prole-mind is not based upon any snobbery, rather it is of functional basis. Competency, not class, should be the sole criteria for decision eligibility.  The Left needs the stupid to survive.

Posted by The Social Pathologist at 9:43 am 9 comments: