The Zimmerman Verdict: Evidence of the Croatia effect.

In order to understand the black and liberal community outrage to the Zimmerman verdict it's best to take ourselves back to that bastion of left wing multiculturalism, the former Yugoslavia. I think it is important to go that troubled country since the student of it will learn much which can be applied to the modern political situation, especially in the U.S.

The former Yugoslavia was comprised of six different ethnic groups but for the purposes of our discussion we will limit our discussion selves to the two biggest groups; the Croats and the Serbs.

Due to a combination of demography and shrewd politics Serbia was the most militarily successful of the two and as a consequence ensured that its citizens secured the privileged positions in the Yugoslav republic. An objective analysis of the ethnic occupation of the government senior positions showed clear discrimination against Croats. Even so, Croats were still able to assume some of the positions of power, particularly in the non-security positions of government. Still, the net result of this state of affairs was that the Croats en masse felt that they were discriminated against and oppressed by a stronger ethnic group who had all the military power. Futhermore, because Croats were more westernised and economically productive, the Croats felt that their substandard economic position was due to Serbian mismanagement and Serbian corruption. The idea was that Croatia, once freed of Serbian domination would flower into a new Switzerland.

The war came and went, and Croatia is now independent, however, it still remains an economic mess much to the disgust of the average Croat. However, the current situation poses a dilemma for the community there. In the past the Croats could, without much thinking, blame all their problems on the Serbs, however, now that the Serb bogeyman is gone. People are beginning to search for other explanations of their economic failure. Some are blaming the politicians, others the financial markets but to some of the more perceptive individuals they are beginning to see that the problems are with themselves. This, in my mind, is one of the first steps toward genuine reform of the country. The riddance of the Serbian bogeyman was more than a riddance of physical oppression it was a riddance of a convenient excuse for all their failures. Their desire to join the EU was not based on any love of Europeanism, but rather the realisation economically and socially advancement can only come about through the forced adoption of a Western European model.

Now, the point of this little bit of Yugoslavian social history is that it directly applicable to race relations in the U.S. and to the underperformance of black community there.

From this side of the big pond, it would appear to me that metrics of Black social well-being were higher in bad old days of segregation rather than in the modern days of multiculturalism. Segregation may have, in fact, paradoxically enhanced black social, if not economic, well being. 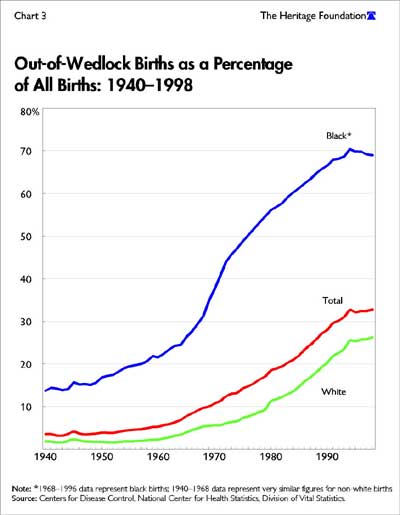 Though there are many reasons, we see a disparate effect of the social changes of the Sixties on the Black community. Part of the reason, I think, is because of the "Croatia effect" on Black people's thinking.  In the 1960's everything became the White man's fault.

In the age of segregation, the Black man was treated as a second class citizen. He was limited in his privileges and limited in his opportunities by a system which segregated him from white people. He realised that the Whites did not give a shit about him nor were not going to give him a break. To be fair, they didn't take what little he had. In effect, he was psychologically on his own. Any improvement was going to be self-improvement since the white man was not going to give him anything.  Responsibility was forced onto him. He had to make the best out of the shitty circumstances life handed him.

However, with desegregation, the Black man became integrated--at least in theory-- in the wider community. The preponderant success of white people, when compared to his own failure, combined with the self flagellation of the liberals made it easier to blame all of his problems on whites. They provided a convenient scapegoat for his own abdications of responsibility. If he failed, it was because the the white man plotted against him, if the white man helped him and he failed still, it was because the white man did not help enough. He never had to take responsibility. There was always someone else to blame.

It needs to be understood that this is not a particularly Black way of thinking. All human groups think the same way. White workers, in attempting to explain their own shitty lives will blame white bosses; Indonesians will blame industrious Chinese; Zulu will blame Xhosa; German workers, German Jews. In human societies wherever there is an under-performing group, they will always blame the superior performing (either by hook or crook) group for their troubles.  In any society where one distinct group gains advantages over the other it becomes easier for the disadvantaged group to blame the other for all of its problems.

Whats most depressing about the Trayvon Martin controversy is just how polarised opinion is on racial lines. It's as if the facts don't matter. Likewise, in the U.S. federal elections 93% of Black people voted for Obama. Identity politics trumps all.

This "Croatia effect" thinking amongst black people has profound implications for any long term improvement in the social situation amongst blacks in the U.S. It may just be that some form of soft segregation and parallel social structures may need to be set up, where blacks are self governing and realise that they are on thier own. No white man to blame and no white man to help.  Whether high quality blacks--16% of blacks have IQ's over 100--would want to invest in such a project is a different issue. It appears to me that this group of people, especially the few conservative ones have more in common with successful whites than self-identifying with the "brotha's in the hood".

On a similar note, if you can countenance the notion  that the mean Black I.Q is 85, is the the promotion of universal suffrage in Africa a recipe for the election of demagogues and rouges? Giving the vote to the top 10% of Native Africans would appear to be far better for political stability and general welfare than promoting American style democracy in the region.
Posted by The Social Pathologist at 11:34 pm 13 comments: