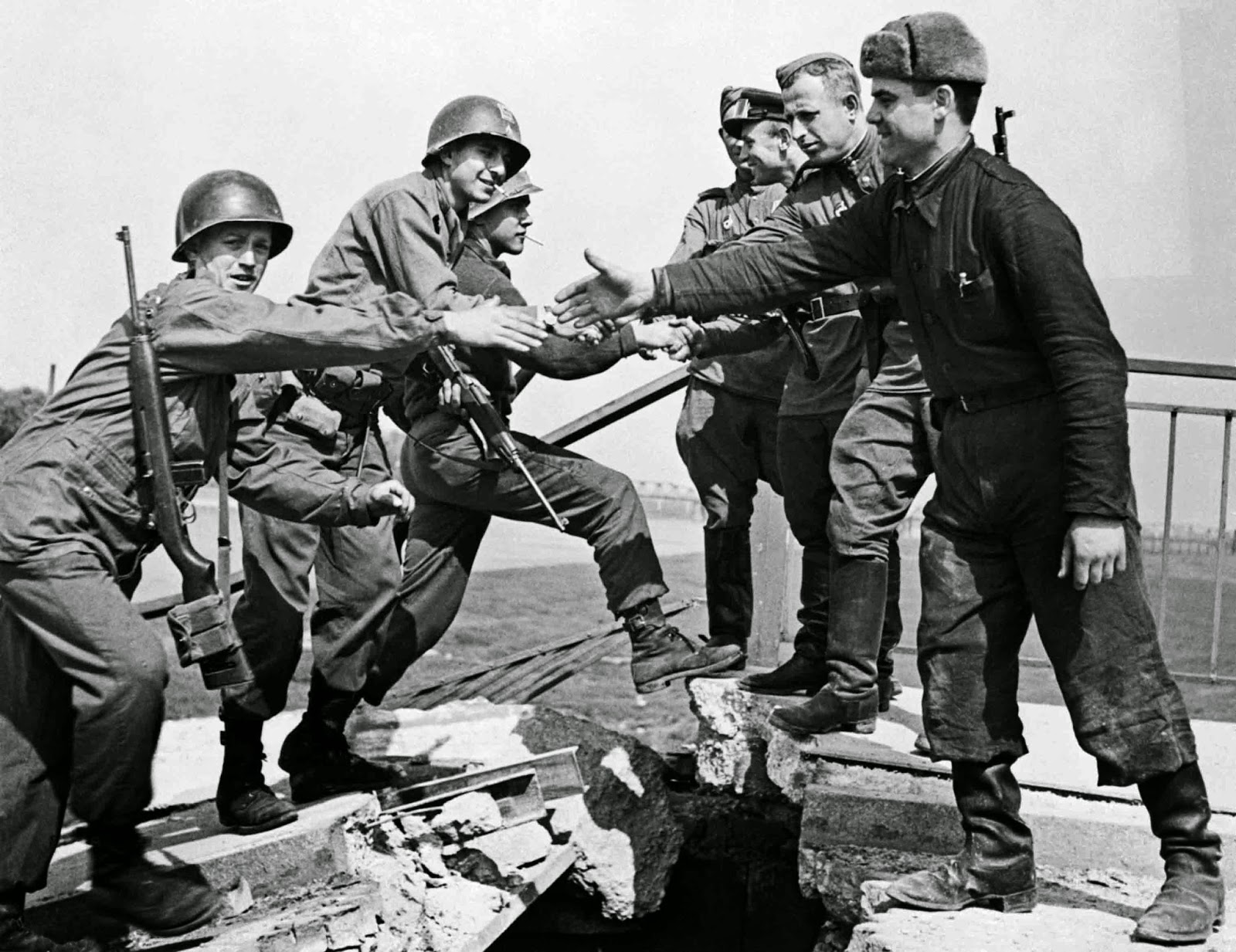 On April 25, 1945, this picture was taken of a meeting between American and Soviet forces on the Elbe. After six years of bloody war it truly was a joyous occasion, and it was wise to forget that nearly six year prior, the guys on the right were having another joyous meeting with another group of friends with whom they had since fallen out with. 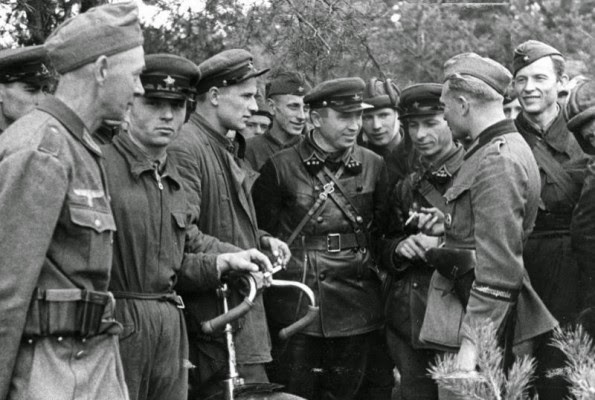 The Eastern European perspective of the Second World War is not the same as the Western European one. Poles do not regard the Liberation of Warsaw in the same way that the French regard the Liberation of Paris and the emotional response to VE day in Europe has different dimension, depending on which side of the Iron Curtain you had the mis/fortune to inhabit. As Keith Lowe's book, Savage Continent, demonstrated, in the East of Europe the killing continued for a long time afterwards and many of those killed were the good guys.

When Hitler's armies stormed in Poland on September 1st, 1939, it was done with the tacit agreement of the Soviet Union, who had promised to invade Poland--on a as per previously agreed timetable--as per  the Ribbentrop-Molotov Pact. And though, chronologically, the Germans invaded first,  the Russians were holding off till it was their turn to put on the screws. World War Two, therefore, was a result of the combined German-Soviet agreement to unjustly partition Poland. It is therefore strange for an Eastern European to hear of how Germany "started the war", whereas in reality it was Germany and Russia that did it. For countries in Eastern Europe, the "liberation" from the Germans was the starting date for the enslavement by the Russians. Liberation proper, only occurring after the fall of Communism. What has always perplexed me is, why isn't this fact more readily recognised in the West?  Or what I should really say is, in the European cultures west of the Iron Curtain.

What always amazes me is the differential judgement accorded to both ideologies (and countries) when in reality both were malignant facets of evil. Nazism was vile on so many dimensions; for its system of concentration camps its, treatment of the Jews, it's embrace of savagery and cruelty, its plunder and so on. But so was Soviet Communism, whose body count was greater than that of Nazism and whose cruelties and savageries were on many instances on par. Every now and then I hear of how one was worse/ or better than the other but in my opinion it's a bit like choosing between cancer of the lung or the bowel: both are bad in their own kind of ways, there is nothing good about either of them.

In Eastern Europe both are seen as vile ideologies, but why the slant to the Left in the West? Especially, as the on-the-ground facts were better known there than in the East where there was widespread censorship and suppression of information?

Part of the reason I suspect, is that the West never had to fight the Russians and never got the full  experience of Bolshevism. Had, perhaps, five to six million Anglos or Frenchies been sent to the Gulag and "disappeared" Western perceptions of Russia would be different. Since it only happened to the "Western Slavs/Krauts" it really didn't matter and it really never made it into the public consciousness.  Furthermore, for those in the know, the alliance with the Communist savages must have caused considerable angst, and there is now considerable evidence that the West did know what was going on but preferred to turn a blind eye lest the "alliance" be threatened by moral questions that would have been raised.

Necessary exigencies partially explain this dual standard during war time but with collapse of the Nazis, and the emergence of the Cold War, there was more than enough time for History to be set straight and yet it hasn't. Why? Part of the reason, I suspect, is because of the "Semitisation" of history in the West.

The terrible experience of Nazism by the Jews has resulted in their community focusing particular attention to the Nazi period, trying to understanding it, particularly with regard to their own cultural context. Given the predominance of Jews in academia and the media, the leftward slant of modern Judaism,  the freedom of speech in the West and the sheer weight of their publications ensured that the West was given a particularly Semitic interpretation of the Fascist phenomenon. This resulted in a moral evaluation which made the National Socialists more evil than the International Socialists.

Furthermore, the Anglo experience of fighting the Germans  and of having the Russians as allies, combined with cultural insularity, tended to emphasise this view. I also feel that once the full horror of what happened to the Jews became apparent, I think many of that many of the Allies were more than  happy to the let the focus fall onto German evil instead lest their own culpability in the Holocaust be bought to light by refusing to provide Jews with refuge.  The prevailing cultural interpretation of the Nazi period became Semitised.

By Semitisation, I mean the interpretation of things through a Jewish dimension to the exclusion of other facts. Now, I want to stress that I don't believe that this is as a result of a deliberate policy by the Jews or some sort of conspiratorial effort, rather, historical and biocognitive factors are more than responsible for this state of affairs.

On the other hand, in Eastern Europe, the post war interpretation of Nazi period was heavily Communised.  Here the official interpretation did not emphasise the Jewish dimension of the Nazi period but tended to see it in terms of the Marxist struggle, though everyone knew that the Jews were treated badly. It's hard to see the Holocaust as anything special when so much indiscriminate death was around in the post-War killing fields or Eastern Europe and where friends are family were disappearing in the night well into the 1970's.

I'll illustrate what I mean by Semitisation. For instance, it's a given that  Hitler is understood to be virulent anti-Semite, which he was, but it needs to be understood that he was primarily a racial purist and his anti-Semitism was secondary to it. The Semitic interpretation tends to see Hitler as intrinsically anti-semitic.  Now there's plenty enough evidence to show that Hitler was not just anti-Jewish, but he was also anti-Slav, anti-Gypsy anti-homosexual, anti-deformed, anti-Communist and anti-Catholic. Well before his final solution was formally implemented in 1942 Hitler had signed the decree for the T4 program  (1939, involuntary "euthanasia" of the mentally defectives) and it appears that the physical liquidation of the Jews was not on the top of his priority list. Though once the Nazi's decided to exterminate the Jews they did so with Germanic efficiency.

However,  as vile as the Final Solution was, an even greater depravity was in preparation, the Nazi's, Generalplan Ost, which would have killed tens of millions of Slavs and literally exterminated Poland. Focusing on Hitler as an intrinsic anti-Semite instead of virulent Darwinian racist downplays the racial purity aspect of the Nazi ideology whilst elevating the importance of the anti-Semitism.  Furthermore, by emphasising the Semitic dimension of Communism i.e. it was generally pro-Semitic early on, Fascism and Communism can be polarised on a Semitic axis. With Fascism being intrinsically anti-Semitic and thus bad, whilst communism which was pro-Semitic, and thus less evil (good). Fascism is thus seen as "more evil" from this perspective and Communist victims are accorded a lower status than Nazi ones. This type of "logic" offends common sense, natural justice and in Eastern Europe, this particularly tends to rub people the wrong way.

Semtisation is not just a Jewish phenomenon, it also needs to be seen as as a Nazi/Crypto-Nazi one, except in the negative sense. Crypto Nazi's are always on the lookout for the Jewish dimension in anything and judge the goodness or badness of a thing by its position on their own Semitic axis. If a Jew or Gentile is responsible for a crime then the Jew is worse even though the culpability is the same. Furthermore, a Jewish dimension is imputed even if there is no factual evidence for it. If the economy is in tatters, it's the fault of the Jews, If a country has lost the war, Jews are to blame. If the public is shifting to the Left the Jews are to blame. Alternative explanations are not sought and conflicting evidence is explained away.

In a paradoxical sort of way both Semites and anti-Semites approach history through a Semitic interpretation, though by opposite directions and both accord Semitic issues a predominance which they doesn't necessarily deserve, since, in reality,  the Jewish aspect of thing is frequently unimportant.

The problem with Semitisation is that it is a distortion of reality and an impairment to accurate thought, and whilst some people may be disposed to hate/love the Jews the fact is that Semtisation tends to inflate their significance out of all proportion to that warranted by events.  Clear thinkers should steer well away from the cognitive habit and concentrate on objectivity and empirical evidence. Furthermore the Right should steer well clear of it, since Semtisation of issues tends to "Frame-shift" them towards contemporary culturally accepted norms of Judaism regardless of their ontological congruence. Semitising an issue in the Nazi /Muslim world would be to make the issue negative on the other hand Semitising an issue in the U.S. would place it either in the "uncritical philo-semite or rabid anti-Semite polarities.

For example, when Mearsheimer and Walt published their book on the Israeli lobby, the response in the U.S. was predictable. They were obviously anti-Semites and crypto-Nazi's by association. Instead of discussing the contents of their book, and the relative merits of it,  M+W, spent a lot of time defending themselves from charges of anti-Semitism. Here in Australia, where there is a far weaker Likud lobby, the book was given a reasonable treatment. In the Middle East, the book was proof of Jewish perfidy and even garnered praise from Osama-bin-Laden, further smearing M+W through guilt by involuntary association. An objectivist would simply say than in democratic country like the U.S.,  lobbies are allowed to be formed and advocate their various interests to lawmakers. The fact that the Jewish lobby is well organised and effectively lobbies for Israel is a credit to them.  Big deal. Its all above board. Car makers, environmentalists and NAACP do it all the time and no one goes rabid when the fact is pointed out. If Americans aren't happy with their county's policies they're welcome to lobby as well, but its far easier to invoke Jewish superpowers, mind control and conspiratorial tendencies than to do something.

Furthermore, for the Right, Semitisation acts like a magnet to wannabe Nazi's and weakens it to entryism by them. It's a no win situation, and the best way out of no win situation is not to get into it.

For the record, I'm eusemetic, and I don't like to talk about Jewish issues since the current cultural frame in which I operate admits only two positions. Uncritical philo-Semitism which needs to be affirmed continuously or presumptive anti-Semitism. Since I'm neither, and most public discussion tends to occur with morons, the matter tends to be a waste of time with me either being called a Nazi or a Jewish tool. The only reason why I'm breaking my silence on the matter is because I'm seeing anti-Semitic muttering amongst some of the Neoreactionaires and I don't think they realise just how wide they're opening the door to the Neo-Nazi's. Furthermore they're chasing imaginary demons instead of tackling serious intellectual problems.

Posted by The Social Pathologist at 9:04 pm 12 comments: