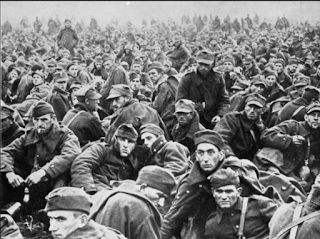 “Monophorism” was Blondel's term for a reigning clerical authoritarianism which on principle refused to recognize that grace can be at work from below.


One of things which you become aware of when you start digging into theology is that some guys foresaw the current apostasy from miles away.  Maurice Blondel was one of these and recognised that the traditional model of "Priests Smart and People dumb" i.e. Monophorism,  devastated the interior spirituality of the laity and facilitated the destruction of the faith.  Now, while many of the laity could be "good" under this model,  it was a goodness of docility and obedience. The layman was not meant to have ideas or internal volition and the faith was to be received and not really thought about and it produced a sort of spiritual infantilism which as able to lapse if the strong parent went missing.

The Catholic Church under this model resembled a typical World War 1/Soviet Era combat formation. Strongly disciplined and led by the general. A battle plan was drawn and the soldier was expected to advance according to the plan;  individual initiative being frowned upon, especially by the lower ranks, since everything had been worked out and co-ordinated by the staff officers.  The innovators of stormtroop tactics immediately recognised  that there was a weak-point with this approach: if you could decapitate the leadership, then the troops would be helpless and easily destroyed. Sure, there would be pockets of strong resistance, but without command from the top many of the troops would simply surrender and walk away. There was no defence-in-depth.

Protestantism, especially in its evangelical versions, avoided this approach and tended to stress the layman's strong personal relationship with Christ and left the individual to their own Christianity. As this blog has mentioned, there are many faults with this approach but it does tend to produce a more autonomous Christian than traditional Catholicism does.

To illustrate what I mean here are two bits of data from Pew Research. The first, graph compares the commitment gap between Catholics and Protestants in South America. The metric of commitment--a reasonable one in my opinion--being attendance at regular Church services and praying daily.  From the table we can see that in every country in South America, Protestants out perform Catholics by this metric. 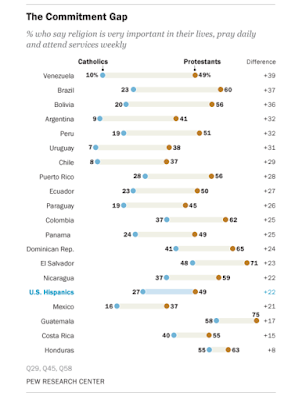 The second table, looks at approval of same sex "marriage" by religious denomination in the U.S. The data is pretty damning for U.S. Catholics. Mainline Protestant denominations are marginally worse but not by much. However , those "dumb" Evangelical Christians appear to have views which have a far better correlation with Biblical views of homosexuality. What gives? 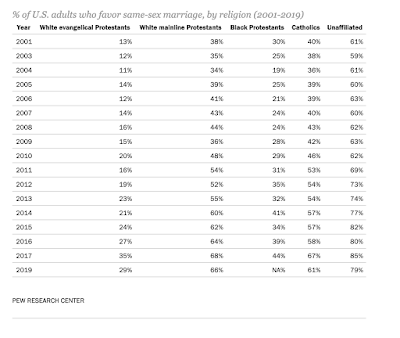 One of the things about Protestantism is that it a religion strongly associated with the bourgeoisie. And one of the the thing about bourgeois society it the strong emphasis it places on individual act and responsibility. Protestant societies encourage more individual autonomy and internal locus of control. What this means is that although Protestants may think badly--with all the problems that brings-- they think for themselves. Paradoxically, "simplistic" Protestants who take the Bible literally are quite likely to be its strongest adherents as they can't "explain away" Biblical imperatives to conform with contemporary fashions.

In my opinion, Catholics can only provide a strong pushback against the Pozz  only if they are capably led and strongly disciplined. When the leadership is effectively "decapitated" the average Catholic lacks the internal resilience to push back against it. This would--in a way--seem to shore up the arguments of the Traditionalists who see Vatican Two as the great mistake of Catholicism. Vatican II gave the spiritually-infantile freedom........with predictable consequences.

See, the thing to understand is that Catholicism prior to Vatican II, despite all of it's window dressing  and railing against Modernism was actually Modernist itself and was unwittingly encouraging the production of Mass-Man and it's hard to fight the thing when you're the thing itself.

Let me explain by way of uncomfortable analogy.

Life inside the Soviet Union Catholic Church was strongly controlled by the clergy Party. Information was heavily censored filtered, lest the laity workers be corrupted. The Papacy Party was always right and it was the duty of the worker to obey the party and deviation from the party line sent the worker to Hell Siberia.

The underlying principle at play here was the if the Church Party could engineer a society where it could control what the laity workers were exposed to and protect them from bad ideas they could engineer a faithful Catholic Worker through social engineering. Just as the modern degeneracy feels that through appropriate social engineering and censorship it can create the soytopia, traditional Catholicism felt as long as it had the reigns of power it could create its own version of the same.

Astute observers will note that this is the Leftist project in a nutshell. Once you start looking into it, the similarities in social structure and command between Communism and Pre-Vatican II Catholicism are uncomfortably close.

So, in a sense, the critics of Vatican Two are right: "relaxing the system"  bought the whole house down in the same way that Perestroika eventually destroyed the Soviet Union.  The old System only worked under strong social control.  The problem for the wistful trads is that although they may dream for a return of the pre-Vatican II Church, the social and cultural contingencies that shored up the authoritarian societies of the past have been undercut by the phenomenon of modernity. As Franco's Spain, De Valera's Ireland and Salazar's Portugal have shown, Integralist societies rapidly collapse into "Modernity" as soon as the thumbscrews are taken off. Years of integralism did not produce the internal resilience to protect against the Pozz, and paradoxically may have created the preconditions for its rapid adoption.

On the other hand, despite the being exposed to the cultural sewer that is the contemporary West, Evangelical Protestants tend to be holding firm.

It is my opinion that the Vatican Two would have been far more successful if the Church gradually relaxed its rules and "softly" Protestantised the Church but this is just speculation and beyond the scope of this current post.

Posted by The Social Pathologist at 11:57 pm 22 comments: