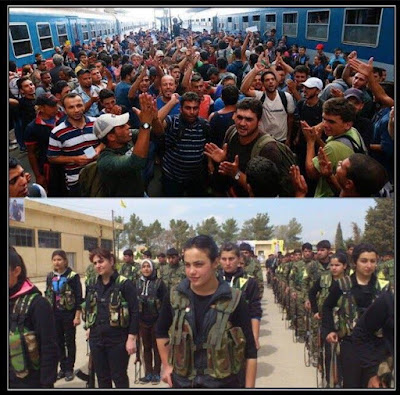 Posted by The Social Pathologist at 10:49 am

OK I'll bite, I'm too stupid to know that it means. WTF?
In my defense, I don't follow the news (assume it's about the Syrian immigrants?)

Yep, they leave the fighting for the women. Send the lot of 'em back.

One picture is a bunch of unarmed men (who you correctly surmise are refugees - fighting aged men who could not be bothered to fight for their country).

The second picture is a bunch of women who flatter themselves (and have been flattered by others) as "soldiers."

In other words, everything these days is back-asswards.

"Everything these days is back-asswards"

Yep. Pretty much sums it up.

"Everything these days is back-asswards"
Cui, SP, got it. Thanks.

But not backwards at all. Predictable. 4G War. Sucks to lose is the real meaning I guess. But "backwards"? That's like the American Indians saying the Whites didn't fight fair, dammit.

Sure, deport. But without authentic religion (and the resulting children) the invasion will continue. We cannot push out...so everyone will push in. Real message: get used to losing.

Is there some kind of sexual dimorphism reversal or is it simply superior technology that women "Soldiers" that fight in Syria don't seem to cause visible ill effects on their military units when deployed to the frontline and winning against ISIL and others. Which is evident from the Strategic map of Syria currently.

Firstly, Kurdish culture is different from Arab culture. I think the lack of dysfunction with regard to women fighting stems from Kurdish sexual mores. They've still not embraced the sexual revolution and hence the disasterous sexual dynamic that occurs in Western Armies. In the Kurdish military context, a woman is a defacto "man" and therefore not sexually accessable. You see the same thing in Slavic armies.