One of the early scholars looking at communist "brainwashing" techniques was American psychiatrist was Robert Lifton. As a result of his studies he published a book, Thought Reform and the Psychology of Totalism. Here, he set out to identify the various mechanisms that totalitarian regimes used to manipulate people's thinking.

A powerful mechanism that emerged was that of Milieu Control. Briefly, Milleau control involves the control of information that an individual receives. By controlling factual data and use of language, totalitarian regimes can influence the milieu in which thought occurs. Suppressing information that is not conducive to "the cause" is one such way of exerting control. The other is by painting the accepted cause in a positive light and the negative view in its opposite.

Areas in which Milieu Control is particularly powerful is where the media are the only source of information on the subject. Foreign policy is particularly susceptible to this kind of manipulation.

It's clear that various factions in the community are keen on the West intervening in the war in Syria. My own view, based upon discussions with Syrians is that the situation is far more complex than what we have been shown on the television and whilst Assad has his faults, the opposition aren't much better. It's a choice between bad and worse.  Should the West choose to support the anti-Assad forces, they would be in the curious position of fighting the Taliban in Afghanistan and supporting it in Syria! Still there seem to be many "hawks" eager to embroil the West in another war. 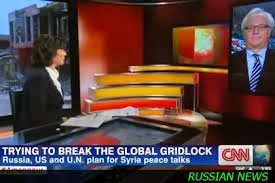 Recently CNN invited Vitaly Churkin to discuss the matter. CNN "edited" the interview to such an extent that Churkin had to formally complain about the network's misrepresentation of his position.
Maria Zarkharova a spokesperson from the Ministry of Foreign affairs had this to say about the incident.

"The principal comments made by Russian permanent representative to the UN, Vitaly Churkin, on Syria in his interview on CNN were cut from the screened version of this interview. Actually it is hard to understand why one of the major news channels is not interested in presenting Russia’s position on Syria crisis, especially regarding the upcoming conference Geneva-2. Unfortunately, it is not the first time when Russian diplomats and officials interviews have been censored in western media."


The reasons that the CNN television network "edited" an interview with Russia's Permanent Representative to the UN, Vitaly Churkin, is beyond understanding, Maria Zakharova said in statement on Facebook:

"The fact that CNN cut a fundamental assessment on Syria out of the interview with V. Churkin is beyond unprofessionalism, and generally beyond understanding. This Western media’s practice of throwing away passages or assessments from an interview that are “unnecessary” for their audience became not the exception, but the norm, especially in relation to Russian representatives. But, unfortunately, this is not the pinnacle of cynicism. A couple of phrases were cut out, so what? You can always say that the broadcast time did not allow everything to be shown."

Maria Zakharova pointed out that Russia’s essential views were not allowed on air at the crucial moment of negotiations ahead of the Geneva-2 peace conference:

"Such situations, when a high-ranking Russian representative of a state or business structure is invited to the editorial office of this or that periodical, where ON THE RECORD he talks to journalists for about an hour and answers ALL questions seem inexplicable. As you may have guessed, the next day, to the delight of the press service, nothing is published either in the printed or electronic version of the periodical. The same zero result is repeated one day later, two days later, a week later. To your question “Why?” you receive an astounding answer: “Because he has not said anything interesting”. How about that? Here sits an iron man of Russian politics in a Manhattan office and answers questions for an hour non stop and then it turns out that he's a boring, uninteresting person."

And what exactly did CNN edit out?

1) Russia's insistence that the people of Syria be allowed to choose their leadership.
2) The fact that aid to the victims of the war was being stopped by the Rebel leadership.
3) Refugess were fleeing the conflict and heading towards areas controlled by the Assad forces.

CNN were basically editing out any information that could be construed as either pro-Assad or anti-Rebel. They were essentially shaping the information milieu of their audience.

Maria Zakhrova seemed also keen to offer some advice on how to deal with the media. (She's been reading this blog.)

2. At the coordination stage, receive written confirmation from the democratic press that the interview will be aired in full, unabridged and any changes should be agreed and another thing, I don't know how CNN will behave, how it will justify and explain it. I don't know, whether M. McFaul, who has a made lot of claims in the RUSSIAN MEDIA, is going to comment on this story with an AMERICAN channel. But I know that Vitaly Ivanovich Churkin is the highest class professional, who speaks perfect English and is a welcome guest with all the world's media. I am speaking competently, as I had the honor to be his press secretary in 2006-2008. So, any and all attempts to say that the interview was edited due to lack of air time or that the edited sections do not seem relevant are groundless.

Russia Today however, decided to do a story on the matter. It's worth a look at.


And on another semi related issue, it appears from reports in the media that the Gay marriage issue is unstoppable. Yet it is. Croatia yesterday had a referendum on the subject and despite all the efforts of the local media and the Left wing government, resoundingly defeated the proposal to legitimise gay marriage. The local media, who have been relentlessly pushing the case for gay marriage, seemed to have missed that event. Another example of milleu control.

I'd never thought I'd see the day where I would be getting more truthful news from RT and Al-Jazeera  than from the Western Media. The world is insane.
Posted by The Social Pathologist at 10:51 pm

RT is generally interesting as it gives an alternative point of view on many subjects. Put that together with local sources and you might gain a better understanding of reality.

RT has, however, it's own national agenda. I haven't seen anything on the channel supportive of fracking, only negative scaremongering. Russia has much to lose if fracking takes off. It's a big energy exporter.

I am not surprised in the slightest. Remember Serbia? Same thing - a constant barrage of 'Milosevic is the butcher of the Balkans' and 'aggressive Serbs are slaughtering peace loving Bosnians' when anyone from the region could tell you the situation was much more complicated than that and there were many Serbs, Croats, and Greeks willing to talk about it. But the press didn't care.
The myth of a free, independent, unbiased press is false and fresh - yellow journalism was always there and stretches all the way back to Benjamin Franklin posting lies to foment war.
You can't trust them.

How do we know the Russians are telling the truth? We don't. Of course, while I think they should be allowed to tell their story, I would also be very skeptical of their take. It's not like they don't have interests in the region (as do we, but let's not forget our interests diverge!)

I understand that RT has its own agenda and puts its own spin on things. My post was not about the merits of Russia's claims, but rather an illustration of how the media manipulates stories for it's own ends.

Thanks for the link love.