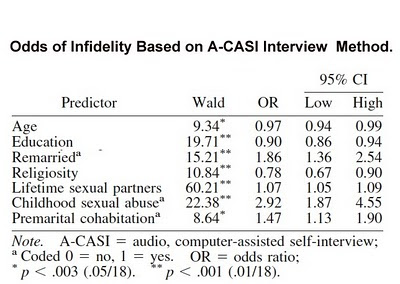 Each additional sexual partner increased the odds of infidelity by 7% while increasing years of education seem to decrease the risk by 10%. Very roughly speaking each addition partner negates the benefit of a year of education with regard to infidelity risk. Yet another study demonstrating the effect of promiscuity on relationship exclusivity/stability.
Posted by The Social Pathologist at 12:02 am

In addition to promiscuity I see a significant factor is sexual abuse as a child. The divorce culture must contribute to this, as it has been known for decades that such is more likely in stepfamilies. What is worse is the "boyfriend" of the divorced woman is even more likely to sexually abuse her child(ren).

The most loveless of marriages therefore is still less likely to produce children who are unable to form their own stable families. Thus one of the major props of unilateral divorce is cut away.

Allowing divorce for any or no reason at all is clearly more damaging to society than anyone feared in the 1970's. It is worth pointing out that in those days supporters of unilateral divorce kept saying such things as "Well, California has had easy divorce for (2 years, 5 years, 7 years, etc.) and the sky hasn't fallen there". Indeed, in 1976 the sky had not fallen, but it was crumbling. A few years later, and Family Court was created to keep up with all the legal issues unilateral divorce created.

Now we can look back and see how widespread, in both family space and time, the damage is. Divorce hits the children, the parents, the neighbors, and so forth, and the effects last for decades.

Something to contemplate the next time a supporter of homosexual "marriage" smugly claims some country has had this for a few years, and "the sky hasn't fallen", by the way.

In addition to promiscuity I see a significant factor is sexual abuse as a child.

Unfortunately I've been involved, in the treatment, of several distressing cases of this sort. Some of the police officers who specialise in sexual abuse crimes have told me that quite a few paedophiles target single mothers in order to get access to their children. In the really bad cases the mother tolerates the abuse just so that she does not end up alone again. Dalrymple has written about the phenomena as well.

I agree. Most people are short term orientated. The sexual revolution is only really starting to makes its presence now. Its effects, were for a long time modified by the accumulated social capital that Christianity had established. That capital is now nearly gone and the full effects are beginning to be felt. That's the problem with social engineering. It's all fine initially, which seems to justify the changes, then of course everything goes out of kilter and the average prole wonders why.

No fault divorce is probably the worst social calamity that has befallen Western Society.

Very nice article and I am Obat Bius very happy to meet with your blog, the articles are very interesting, thank you for share very amazing article and I wait for the next quality articles.